Fellow Immortal Bob Fulton has described the late Graeme Langlands as the best all-round player in the game's history.

Fulton, one of the game's eight Immortals, played alongside Langlands and under him as captain-coach for the Australian team from 1968 until the last of the versatile St George legend's Test appearances in 1975.

While regarded as a great fullback who had always preferred to run the ball into opposition defences rather than kick it, there were many aspects to Langlands' game and he was considered so good that another position often had to be found for him in representative teams.

As a result, Langlands played 25 of his 45 appearances for Australia in the centres, one on the wing and another off the bench.

"I am quite comfortable in saying he was the best all-round player the game has ever had," Fulton told NRL.com after the death of Langlands, aged 76, in his sleep at a nursing home on Saturday night.

"When you start isolating the various aspects of an all-rounder, you are talking about individual brilliance.

"He was tough, he was a goal kicker, he was a general-play kicker, he could play centre, wing or fullback and he played all of those positions at international level, which not a lot of people could say about any other player in the game.

"There would be plenty of debate about who is the best back and best forward but I am putting the label on "Chang" as the best allrounder I have ever seen, and I cover a fair amount of time in the game."

Many believe Langlands' versatility controversially cost him a place in the Team of the Century chosen to mark the centenary of the game in Australia in 2008, but Fulton said there was no doubt he would have been a superstar in any era of the game.

"If you look through every generation there were players who other players liked playing with and in that particular period Chang was that sort of player," Fulton said.

"He was a leader and a real presence player. If a game had to be won he could do it any way. He could do it even with a tough run.

"He played at about 84kg, but under the present training structures and professionalism he would have been up to 95kg."

Besides being a key member of the St George teams which continued the club's dominance in the 1960s, with Langlands winning four grand finals alongside fellow Immortals Reg Gasnier and John Raper and halfback Billy Smith, he also played a significant role in establishing Australia as the leading Test nation.

Langlands first captained Australia in 1970 and led the team as captain or captain-coach on 15 occasions, becoming the first player to score more than 100 points for the Kangaroos as he led his team to victory in the deciding Test of the 1974 series against Great Britain at the SCG.

"If you could liken him to a song, it would be 'I Did It My Way'," said Fulton, who was a regular room-mate of Langlands on tours with the Australia team.

"He was a bloke who you had to get know, but once you did he was as loyal as all hell, and we were great mates."

In recent months Langlands had battled dementia and alzheimers and was unable face court on charges of indecent dealing with a girl under 16 over allegations stemming back to the 1980s.

ARLC chairman John Grant, who played alongside Langlands at the 1972 World Cup, acknowledged that he "wasn't everyone's cup of tea" but praised his leadership and understanding of the game.

"I met him when I was 22, I was the only Queenslander on the tour and Chang was the unquestioned leader," Grant said. "He certainly didn't go out of his way to please people but his football was just fantastic. It was outstanding and that is why he is an Immortal."

Grant, who played on the wing, was near to Langlands when he was infamously denied a try which would have won the World Cup final against Great Britain because French officials didn't believe it was possible for him to have been onside from halfback Dennis Ward's kick.

"When Ward put the kick up I was onside and Chang was behind me," Grant said. "He must have got some message from Ward that he was going to put it up and Chang came past me like a steam train, dived over the line, caught the ball and scored the try.

"The referee said he couldn't have possibly done that but to this day that was a try and it could have turned the game. Great Britain won the game on a count back after extra time, which was the last time they won a World Cup."

Langlands wasn't renowned for motivational speeches but Grant, who had remained in contact with him during his six years as ARLC chairman, said he led by actions both on and off the field in his role as Australia captain.

"We had a big night out in Perpignan and Harry Bath, the coach, was not very pleased so he got us all up at 7am to train and it was freezing cold and raining," Grant said. "When we went down to the local oval, Bath just made us all run and Chang led the run for the whole time we ran.

Ron Coote, who replaced Langlands as Kangaroos captain for the 1970 World Cup after he had been ruled out with a broken hand, described him as one of the toughest and best players he had played with or against.

"Myself and Bob McCarthy first played against him for the South Sydney Under 19s team in Wollongong in 1963. He was playing for Wollongong and you certainly see then that he was a very special player," said Coote, who is President of Men of League.

"He captained St George to a lot of success and was one of the all-time greats. He was so tough, he had a great sidestep and the speed he had and his agility to find a hole in the opposition defence just set him apart."

I am quite comfortable in saying he was the best all-round player the game has ever had.

His toughness and willingness to play through pain also led to another infamous moment, when Langlands – wearing white boots –was a mere passenger in the 1975 grand final, after a painkilling needle in his ankle hit a nerve.

"If he had been fit, everyone would have been wearing white boots 15 years earlier but the needle went in the wrong way and he couldn't feel anything in his leg," St George team-mate Steve Edge recalled of the 38-0 loss to Eastern Suburbs Roosters.

"We were in the game, it was only 5-0 at halftime and we were a bit unlucky not to be in front but afterwards everyone was down in the dumps. Having Chang in your team was like having an extra two players on the field, he was that good."

Edge said Langlands would always be associated with the club for whom he played 227 matches in 14 seasons, and along with Smith was one of the last two surviving members of the great St George teams which won 11 consecutive premierships from 1956.

"One of the greatest things that ever happened to me was that I got to play with two of my heroes who I had watched growing up in Graeme Langlands and Billy Smith," Edge said.

"Opposition teams would kick the ball down the field and you'd say just watch the first two tacklers, there isn't a chance in the world of them getting him. He'd put on that big sidestep and away he would go." 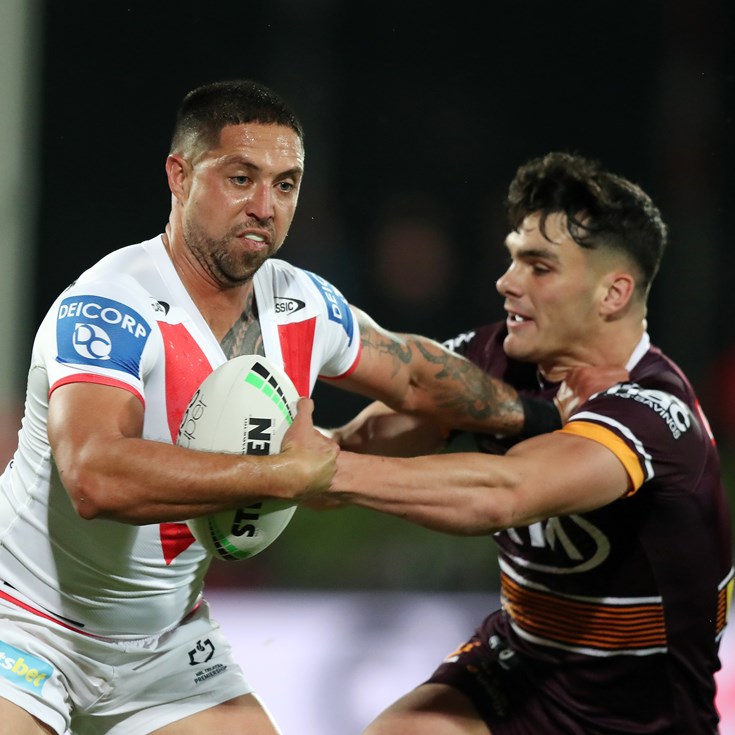