The St George Illawarra Dragons will face the Cronulla-Sutherland Sharks at Netstrata Jubilee Stadium, Kogarah on Friday, May 21. This is your Round 11 game guide.

Cody Ramsey has arrived at a big moment in his young career after being named to start at fullback for the first time in the NRL.

Most comfortable in the custodian role, Ramsey will be able to truly showcase why he has been signed long-term by the Dragons following Matt Dufty's inconvenient AC joint injury.

Andrew McCullough (eye) has been named at hooker after being cleared of any facial fractures in a boon for the Red V in what was an otherwise horror Magic Round for the club.

Training contracted front-rower Jaiyden Hunt will become St George Illawarra player No. 247 if given the nod for the Sharks. He has been named on the interchange alongside new faces Kaide Ellis and Talatau Amone.

Otherwise, Jordan Pereira (suspension) and last start interchange player Max Feagai are named on the wing. Billy Burns has been named in the centres while Jackson Ford returns to the fold in the back row. Poasa Faamausili will also start at lock.

Tyrell Fuimaono – who was sent off 11 minutes into the game for his hit on Storm fullback Ryan Papenhuyzen – will miss five weeks.

Fuimaono was charged with a grade one reckless high tackle which was amplified by a similar and non-similar offence each over the last two years.

McGuire's four non-similar offence and one similar charge over the last two years as well as 47 carryover points did not help his cause.

The dual Samoan and Australian international has also accepted a $2600 fine for a grade one careless high tackle on Storm centre Justin Olam.

Tariq Sims and Mikaele Ravalawa – who have also had their own respective offences in the last two years – will miss one and two weeks respectively.

St George Illawarra player No. 165 Gerard Beale has returned to the Dragons on a training contract.

Beale played 31 NRL games for the Dragons across the 2013 and 2014 seasons and while he won't feature this Friday night, the hope is that history repeats as far as his last meeting against the Sharks in Dragons colours goes.

Johnson lurking in the shadows

Livewire Sharks playmaker Shaun Johnson will feature in game 200 if he is passed fit for this week's local derby.

Named at 18th man in an otherwise unchanged Sharks line-up, Johnson is in line to return from a hamstring injury.

An excitement machine on his day, an intriguing choice beckons for interim Sharks coach Josh Hannay as far as balancing Johnson in his spine with the likes of Matt Moylan and Chad Townsend is concerned.

Away game… at home

The familiarity of Netstrata Jubilee Stadium will not be lost on the Dragons come Friday night, but it's important that the stadium is red and white predominant too.

Round 11 may not be a St George Illawarra home game but how could you deny yourself the opportunity to see a second local derby in Kogarah in 2021?

All Red V members are required to purchase tickets, via Ticketek for this one. 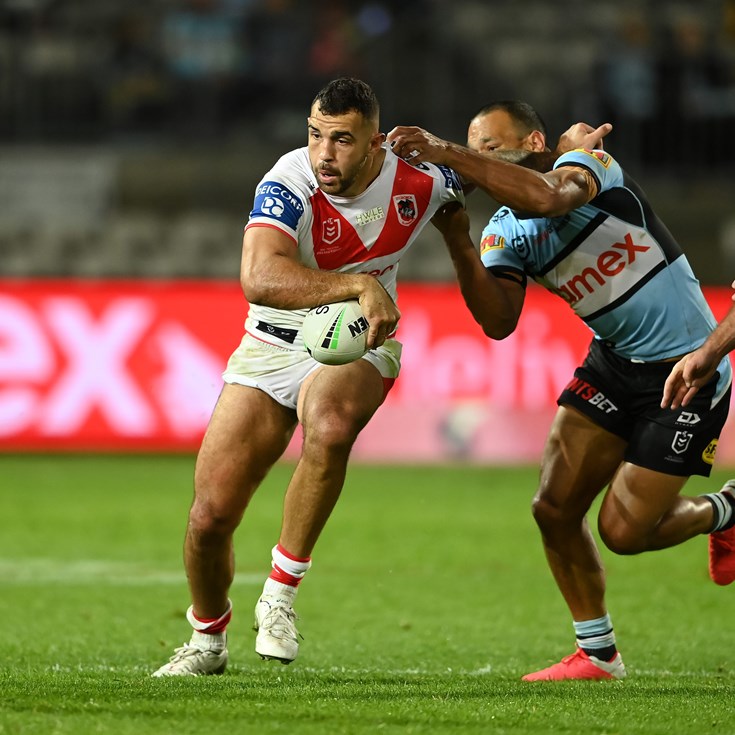