The St George Illawarra Dragons will face the Cronulla-Sutherland Sharks at Netstrata Jubilee Stadium, Kogarah on Sunday, March 14 (6:15pm). This is your Round 1 game guide.

Bird is the word

Jack Bird is the player on everyone's lips ahead of the Dragons' season-opener.

Following a number of injury-ravaged seasons at the Brisbane Broncos, the 25-year-old is fighting fit and will slot in the Dragons' backline.

Brayden Wiliame's presence on the interchange opens up several possibilities for Bird's positional play across the 80 minutes however.

Bird is an often understated x-factor. This despite being equally adept in the back row or halves.

The Berkeley Eagles junior is one of four new faces in the Dragons' 17 this weekend; Daniel Alvaro, Poasa Faamausili and Andrew McCullough being the other three.

Adam Clune has been named at five-eighth otherwise, with Josh Kerr also a notable selection in the back row.

The Sharks are in range of levelling their win-loss record against St George Illawarra this Sunday evening.

Since 1998, the local derby rivals have faced off against one another a whopping 46 times. The Dragons hold a slender advantage against the Sharks (23 wins, 22 losses and one draw) but that could be balanced out in Kogarah come Sunday.

The Dragons will share home ground duties with the Sharks again in 2021, speaking of Netstrata Jubilee Stadium.

Sunday's clash is the prime opportunity for our proud Red V members and fans to show the Shire what's what and drape Kogarah in red and white. Buy tickets now.

No room for Fifita

Andrew Fifita has been named on the extended interchange for the Sharks despite being one of the Indigenous All Stars best in Townville a couple of weeks ago.

Fifita's improved fitness was cause for headlines in the off-season though in spite of this Sharks coach John Morris has opted for Braden Hamlin-Uele, Aaron Woods and new recruit Aiden Tolman.

Matt Moylan's presence at five-eighth will intrigue plenty with Shaun Johnson still recovering from an achilles injury, while ex-Dragon Josh Dugan returns to Kogarah to face off against close friend Bird.

I didn't care for Where's Wally as a kid.

I rarely could find the mischievous, bespectacled scoundrel, no matter the location.

However in my later years my confidence has been rebuilt in finding things among a myriad of attention grabbing forces, thanks to the Dragons' Red V member wall.

There's nothing more inspiring than seeing your name among thousands of other proud Dragons members – undeniably the club's lifeblood.

Be sure to find your name on the 2021 Red V member wall inside Gate A on Sunday afternoon.

By the time the local derby kicks off on Sunday, the Dragons faithful will have been waiting 168 days for the Red V's NRL campaign to recommence.

Even after 14 teams go at it across seven games prior to Sunday evening, the NRL should be commended for saving the best until last! 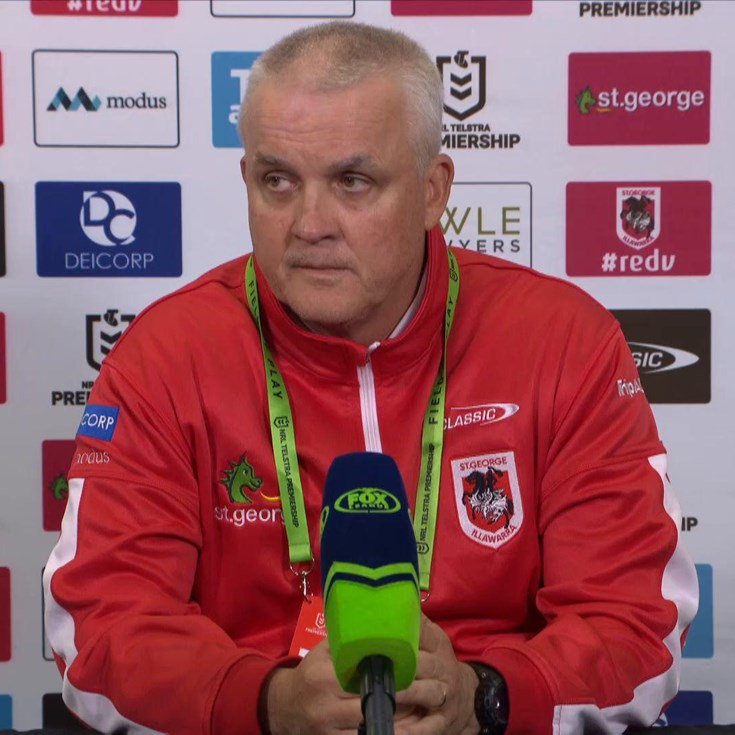