The St George Illawarra Dragons will face the North Queensland Cowboys at Browne Park, Rockhampton on Saturday, August 28 (3pm). This is your Round 24 game day guide.

In the penultimate match of the regular season, the youngsters in the Dragons squad are set to take centre stage.

Tyrell Sloan, Jayden Sullivan and Talatau Amone (all 19) will make up the Dragons' spine alongside the experienced Corey Norman (30). This makes the average age of our spine just 21.8 years of age.

With the exception of Norman, every one of our Round 24 backline players will be at the Red V in 2022 in a good sign of what is brewing at the Dragons.

This week is all about our passionate Red V members.

The Dragons' member appreciation week will see several prizes and experiences offered to our Red V members culminating in our game against the Cowboys on Saturday.

There's plenty you can get involved in and heaps of prizes to be won! Check out the full list here.

Players say thank you to our members

Not even surgery on a broken hand could stop Blake Lawrie from grabbing his boots and playing for the Dragons on Saturday.

Lawrie missed last week's match against the Roosters with a broken hand, but in testament to the 24-year-old's toughness, he has been named to start in the front row.

After signing a short-term loan deal with the Dragons on Tuesday, Sydney Roosters hooker Freddy Lussick will become the 250th player to represent St George Illawarra.

Sullivan will start at hooker while Tariq Sims and Jack De Belin return to their usual lock and back-row positions to round out the team.

The Cowboys get a 117kg boost when Jason Taumalolo returns to the side after a brief injury lay-off.

Valentine Holmes has been named in the centres while Kyle Feldt also returns from injury on the wing.

New recruit Francis Molo who will join the Dragons next season has been held back and won't line up against his future club on Saturday.

The Dragons will finally get to play at Browne Park in Rockhampton after a Covid-19 spike in Queensland cancelled the club's initial Round 20 plans.

Unfortunately for captain Ben Hunt, the Rockhampton local won't take to the field as he recovers from a broken arm but will still be in attendance to say g'day to his hometown.

Head coach Anthony Griffin also grew up in the 'Beef City' and will be aiming for a win at the field where he grew up learning rugby league. 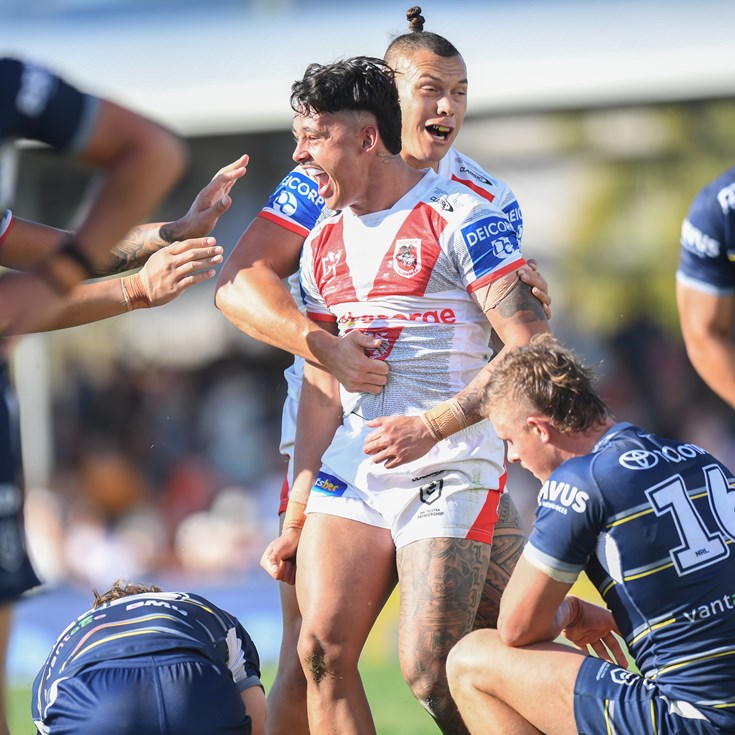