Departing St George Illawarra star Euan Aitken has endorsed the players identified ahead of him as the club's long-term centre options.

Highly-rated twins Max and Mat Feagai were re-signed until the end of the 2022 season on Monday, with the pair upgraded to the 30-man NRL squad.

The pair, who last year represented NSW Under 18s and the Australian schoolboys, were part of the Dragons succession plan after Tim Lafai and Aitken came off contract at the end of this season.

With Lafai released to Canterbury and Aitken joining the Warriors after being advised St George Illawarra would not make him an offer for next season, the Feagais will battle it out with Zac Lomax, Brayden Williame, Jordan Pereira and Mikaele Ravalawa for outside back spots.

Max was named in Dean Young's extended 21-man squad for Friday night’s match against Gold Coast Titans, although it appears unlikely he will make his NRL debut this weekend.

"They are talented. I have had a bit of a relationship with them, working with them through the ranks and doing little skills together so it is great to see those guys get extended," Aitken said.

"They deserve it and I think they are going to be superstars for years come so I can’t wait to see their transition into first grade."

Five-eighth Corey Norman added: "They are good trainers, they are very skilful and talented. One of them is in the squad this week so I think that is good and I can’t wait for them to get their chance."

With Matt Dufty establishing himself at fullback, Lomax and Ravalawa forming a strong right edge combination and halfback Adam Clune impressing in his first 11 NRL matches, St George Illawarra has the nucleus of a backline for years to come.

Max and Mat Feagai, who can both play centre or wing, playmaker Jayden Sullivan and five-eighth Junior Amone are among the next group of exciting youngsters Dragons director of pathways and list management Ian Millward believes can make the step up to the NRL ranks.

Their emergence meant there was no room for Aitken at St George Illawarra, who is understood to have been asked about a shift into the second-row before signing a three-year deal with the Warriors.

"I thought I was playing good enough football to deserve a contract, or even an offer, but it is what it is and I am not bitter," Aitken said.

"I have had a lot of good experiences, the fans are loyal and there is a lot of great support here.

"I am really excited to head over to Auckland for a new chapter in my life with my partner. The Warriors have faced a lot of adversity this year with COVID and moving countries but they are still providing a couple of wins.

"It’s going to be a new start for them as well with a new coach in Nathan Brown."

After back-to-back wins against Parramatta and Brisbane, the Dragons players believe they can bridge the four-point gap to eighth-place Cronulla and qualify for the finals.

"I believe we can," Aitken said. "I would love to finish my time at the club with a finals berth and I think Tyson Frizell would be the same so we are doing everything possible to win our games."

Frizell, who has signed with Newcastle for next year, admitted it was a difficult assignment.

"It’s a tough reach but we are doing everything possible that we can to see ourselves there at the end of the year," he said. "I’d love to be playing some finals footy in my last year with the club."

Norman, whose future at WIN Stadium is under a cloud after he was dropped for the round 13 match against Sydney Roosters, also said the players hadn’t given up on a finals berth.

A decision on Norman's future is likely to rest with the Dragons new coach and the Queensland Origin representative said he'd be happy to work under Anthony Griffin again.

"I had 'Hook' [Griffin] though the [under] 20s and into first grade at Brisbane," Norman said. "I know what he's like and what type of bloke he is.

"I haven't had him as coach for a while, but I got along with him well. He's a good bloke and a good coach." 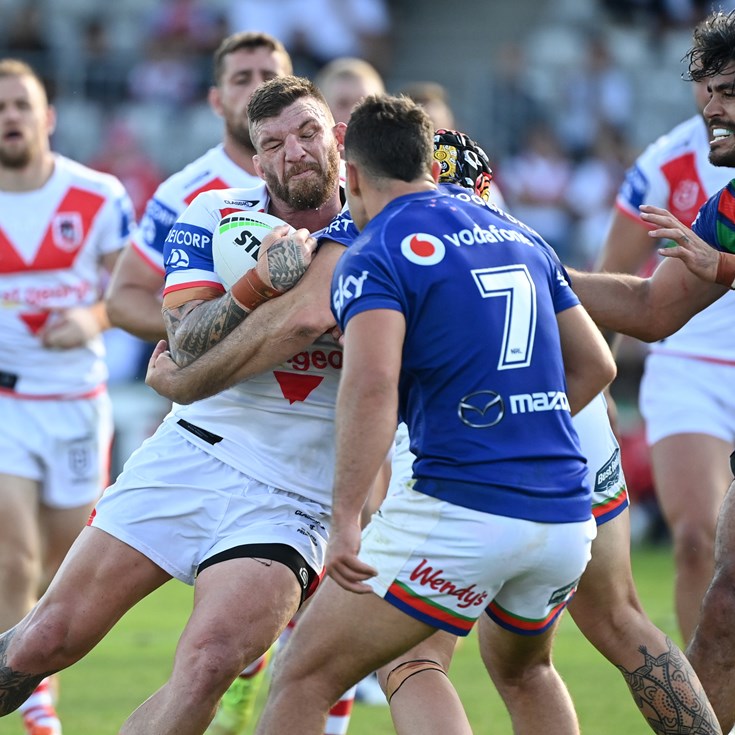