The St George Illawarra Dragons will face the Brisbane Broncos at Suncorp Stadium on Friday, August 21 (7:55pm).  This is your Round 15 game day guide.

The night owls within St George Illawarra's fan base would have seen just before midnight on Wednesday that Dragons back-rower Tyrell Fuimaono failed in his bid to have a dangerous contact charge downgraded.

With Fuimaono named in the back row to face the Broncos, interim coach Dean Young has faced his first team list scratching after taking the reins over the weekend. Veteran forward Trent Merrin will replace Fuimaono in the Dragons' 17.

It's not all doom and gloom for the Dragons though given the return of Australia and New South Wales front-rower Paul Vaughan from a Covid hold after he was caught breaking Covid-19 enforced protocols.

Broncos' Payne in the Haas

The Broncos have lost their past five games and sit precariously on the second-to-bottom rung on the NRL Telstra Premiership ladder.

A wounded team is a dangerous team though, and the Broncos are never a team to take lightly.

There's an even greater emphasis on wounded for the Broncos this week following the suspension of Payne Haas as well as the season-ending shoulder injury to Thomas Flegler.

Ethan Bullemor and Jamil Hopoate have been named on the bench for a Brisbane team that will otherwise welcome the returns of Anthony Milford and Jordan Kahu. 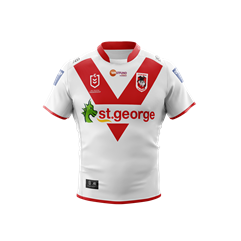 Between the years of 2009 and 2017, Suncorp Stadium may as well have been a graveyard for St George Illawarra hopes and dreams.

10 losses and eight years later and the Dragons have finally seen the light. In fact, the Red V have won three of their four past games at the home of Queensland rugby league.

The Dragons' 48-18 qualifying final win over the Broncos in 2018 was arguably one of the club's greatest victories while a golden point thriller the year following helped further exorcise the Red V's Suncorp demons.

Brisbane is red and white

To purchase tickets, you will need to enter the number of tickets you'd like to purchase as a code. For example, use code TWO for two tickets and then follow the steps to complete your purchase. The maximum group size available is 10 tickets.

Please note, when the ticket price comes up on the screen it will reflect the total ticket price for the number of seats that have been selected, not the price per seat. For game day information, please visit the Broncos website by clicking here.