When one of our favourite footy players is out because of injury, they generally remain out of sight and out of mind.

But behind the scenes our star athletes overcome plenty of physical and mental hurdles to return to the game they love to play.

Last week on Instagram, with some trepidation, Australian Jillaroos player Holli Wheeler shared a post about some of the challenges she has faced during her return from injury.

Social media gives fans glimpses into the arduous rehabilitation processes some of our players go through, but often it doesn’t tell the whole story.

"I think I have always been selective about what I do and don’t share on social media," Wheeler said.

"I tossed and turned about putting it up because I didn’t want to be seen to be reaching for attention. But I was coming from a place of ‘we all have our struggles’ and hopefully someone heard that at that moment that needed to hear it."

I felt really emotional this afternoon - I felt really negative towards my injury, my rehab, my situation. The voices came into my head - “you’re failing, you won’t make it back, why are you even bothering, give up” ⁣ -⁣ Normally I would give in to those voices, I would listen and agree. ⁣ -⁣ NOT ANYMORE! ⁣ -⁣ I stopped ... took some deep breaths told myself I am okay, I got this & thought what I am grateful for. ⁣ -⁣ I am learning to be my biggest fan, my biggest supporter and the positive voice in my head. ⁣ -⁣ Just want to spread some love today to anyone that needs it - ‘you got this’ ♥️⁣ ⁣ #selflove #grateful #rehab

The messages of support Wheeler received from so many people (including people she has never met!) in response to that post was a shock and reminded her of the impact that she and her Jillaroos teammates have.

"Those messages get you going for the next day. Someone enjoys watching me play, I better get back out there. It gives you the kick up the bum you need on the low days," she said.

Wheeler has had her fair share of low days during her rehabilitation of a ruptured ACL, an injury she suffered at the NRL Nines in Perth earlier this year.

Forever grateful for you ♥️⁣

"It was Valentine’s Day, that’s how I always remember it," she recalled.

"I was nice and cute and I organised a rose to be sent to Shon’s [Shonny Stowers] hotel room and sent her a video before her first game because I knew she was a bit nervous in her new team. I wanted her to know how proud of her I was.

"We were both so positive about the year ahead and it’s funny to think that 60-90 seconds into a game, things can change so dramatically.

"We kicked off and defended a set. I didn’t even get to make a tackle. We got the ball back, I had the first run, got tangled up with Chelsea [Lenarduzzi], twisted the wrong way and heard about five or six pops in my knee," she said.

"I knew it wasn’t good because of the instant pain that I was in."

Wheeler has been through an extensive rehab process, facing many challenges.

"Initially, the realisation that my season was over was the worst. My physio had a blank look on his face with the scans in his hand and his voice broke when he told me the news," she said.

"I remember I just started crying. I cried nearly every night for the next week. We got home and Shon held me every night until I fell asleep.

"The acceptance of the injury was the hardest part."

Then after getting used to the pain and getting stronger, came surgery.

"I was in sheer agony just trying to sit down to go to the toilet. Because I’m such an active person and always on the go so it was a struggle to be on crutches."

Since undergoing surgery, Wheeler is taking it week by week. At times, she struggles to see people going through a similar injury who seem to have progressed further than she has, but for Wheeler it is all about trusting the process and understanding all injuries are different.

"It’s not a jealousy thing. It’s not an anger thing. You feel like you’re failing behind because you are looking at someone else who is progressing faster or doing things you can’t do. That’s when the negative thoughts come into your head," she said.

Fortunately, Wheeler has also had plenty of reassurance from her Jillaroos teammates via their group chat, with her mates checking in with her constantly.

"Having that support was so important for me," Wheeler said.

"It helped me come to terms with the injury and be open and honest about it. I didn’t have to shy away from the ugly side of it and I still got the chance to stay in touch with my teammates and stay involved with footy."

A return date for Wheeler is still unknown, but her goal is to make the Australian Jillaroos squad that will travel to England for the World Cup in November 2021.

"I don’t know if I will come back this year because I don’t want to rush anything.

"I don’t take any jersey for granted, whether it be a Dragons jersey or a NSW jersey. You have to work for it and earn those jerseys.

"As much as I would want to play Origin, if I hadn’t played enough games to earn that jersey, then there’s no way I would put my hand up because there are women that have earned that spot ahead of me.

"I’m fortunate enough to be closely involved with all my squads and that’s enough for me this year. I’ll even wash the jerseys if I have to."

For further information on the NRL State of Mind program, click here 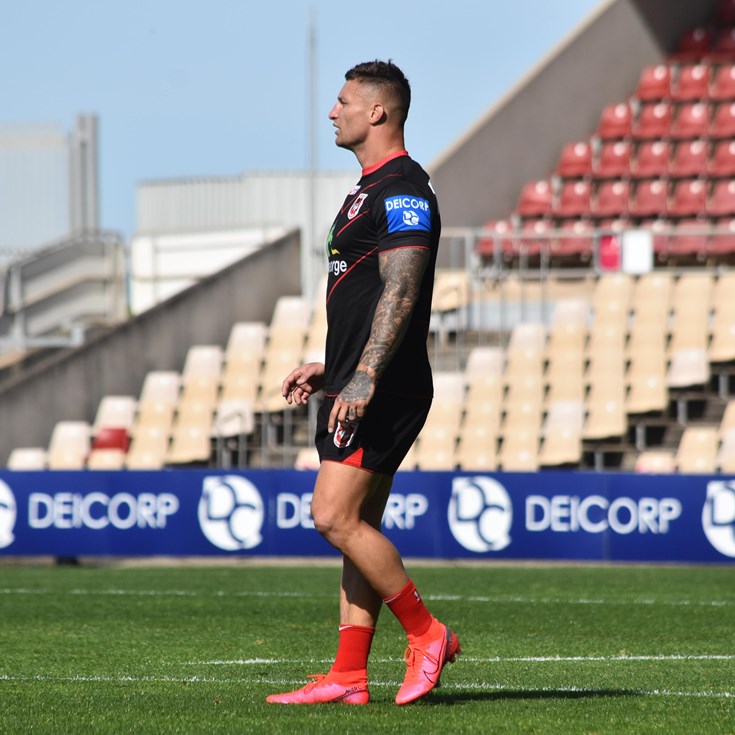