St George Illawarra will look back on their 2018 campaign with mixed feelings after a season of early dominance was followed by a few speed bumps at the business end of the year.

After two seasons of slipping out of finals contention in shock fashion, the Dragons were equal competition leaders up until round 20 and looked like a team with premiership credentials.

Injuries were non-existent, key recruit Ben Hunt had found his groove with skipper Gareth Widdop and the Dragons forward pack was making more metres than any other team.

The challenging time for the side came during the State of Origin period, with five players earning selection for their state.

After winning 12 of their opening 15 matches, Paul McGregor's side slumped to just four wins in their final 11 games.

With the three-game interstate series came injuries, mental fatigue and a dip in form across the board – none more so than for Hunt, with the former Broncos recruit subject of plenty of criticism.

They went from a healthy team to a busted one by season's end, with six of their key men out or struggling with significant injuries.

The Dragons' strong start to the year was enough to see them feature in the finals for the first time in two years but McGregor's men will rue their inability to finish in the top four.

A barnstorming 48-18 effort against the Broncos after being written off in the opening week of the finals was a reward for the team, but their 13-12 semi-final loss to the Rabbitohs a week later showed there is still improvement required in the clutch moments.

Dragons fans should find hope in the season as a whole, with a wealth of youth in Luciano Leilua, Jai Field, Jordan Pereira, Zac Lomax and Blake Lawrie given their shot at the top grade. With a relatively unchanged squad next season, the experience of a finals series will only make the hungry for another giant step in 2019.

There were many standouts throughout the year but Cameron McInnes led from the front with some big numbers to come into calculation for NSW Origin selection.

The 24-year-old never missed a game and touched the ball more than any other player in the competition in 2018 with 2794 receipts. He fell second behind Damien Cook for most carries out of dummy half and set up nine tries from close range.

He finished the season with 1147 tackles at a team-high 93.5% tackle efficiency, and doubled his running metres compared to last season with 60.5 on average, offering more flare out of dummy half.

Overall there was a lot of consistency in the Dragons' game for most of the year with several players getting through every game unscathed. Centre Tim Lafai never missed a minute in 2018, while fullback Matt Dufty also starred in his debut season in the No.1 jersey with 16 line breaks, 106 tackle busts and 126.9 average running metres.

It would be easy to question Ben Hunt's decision to run the ball on the last tackle during the dying moments of the semi-final loss to the Bunnies but at that point it looked like the Dragons' season was just hanging on.

Put simply, the Red V needed to reach the top four given their start to the year, so looking at their period after round 16, what if they managed to come out on top in one or two more games they were expected to win? What if their key men remained fit? Given the closeness of the competition in 2018, it could've been a whole different finals scenario for them.

"I said through the week, if criticism was to come to the team it should come through the coach so leave my players alone," Dragons coach Paul McGregor said on August 18.

"I understand the criticism because it goes with my role. The players get 80 minutes every week to go and protect that character. Benny will be out next week protecting it."

Ben Hunt's performances in the second half of the season, when he also lost his Queensland starting jersey, brought wide media coverage and forced the Dragons coach to step in at various stages each week and defend his playmaker. Hunt later told NRL.com the pressure, expectation and criticism had got to a point where he needed to see a psychiatrist and step away from social media involvement.

The Dragons stood tall with big wins over Cronulla and Melbourne in the early rounds but given the circumstances late in the year, their 48-18 thrashing of Brisbane will be one to remember for the Red V faithful. After slipping to seventh of the ladder at season's end, there were few backing the Dragons to head to Suncorp Stadium and pull off an upset in the sudden-death clash. Jack de Belin was in a moon boot all week, while Gareth Widdop returned from a shoulder injury briefly to put Wayne Bennett's side to the sword. It was a enjoyable return to Brisbane for former Bronco Hunt, who had a big day out in his first appearance in rival colours at the venue.

The Dragons will rue home losses to the Wests Tigers and Warriors but their toughest defeat to accept would have been their 38-0 shutout loss to Canterbury in round 24. It was a tumultuous period for the club with their home fans booing players off the paddock after a promising performance a week earlier.

St George Illawarra will keep their core side together for next season but will lose three key players in consistent forward Leeson Ah Mau, who has signed with the Warriors, club stalwart Jason Nightingale to retirement and fellow winger Nene Macdonald, who has joined North Queensland. The Dragons found a suitable replacement for Ah Mau with Broncos forward Korbin Sims signing a three-year deal with the club from next season, while Jordan Pereira has re-signed on a new two-year contract after a strong debut year on the wing. The club has most of their regular stars signed up to long-term deals with only James Graham, Tariq Sims, Kurt Mann and Matt Dufty coming off contract next season.

There is no reason why the Dragons can't find optimism out of 2018 and push on towards next year. The positives outweighed the negatives and with a healthier roster at the latter stages of the season, another strong start will boost the side to make further steps in ensuring their recent finals experience wasn't a one-off experience. The premiership window is open for the Dragons if they're good enough to build on their finals exit and build on it. 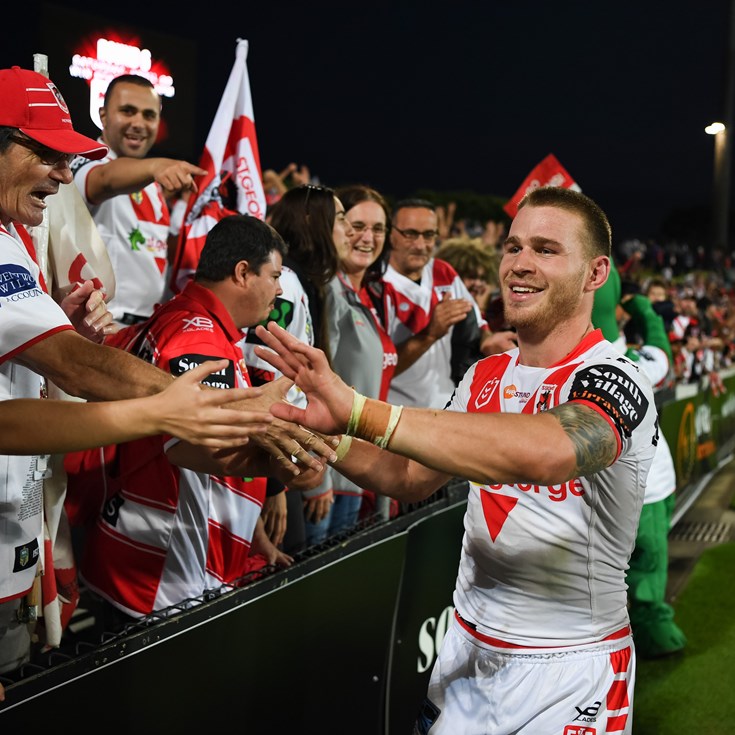