Still nursing a suspect shoulder from a week ago, Adam Reynolds kicked three field goals against the Dragons at ANZ Stadium on Saturday to boot the South Sydney Rabbitohs into the NRL preliminary finals where their arch rivals the Roosters are waiting.

In a bizarre final 10 minutes where the lead changed three times, Reynolds emerged the Rabbitohs hero and in doing so a third match in the 2018 Telstra Premiership Finals Series has been decided by one point.

He kicked his first in the 70th minute and then followed with one-pointers in the 77th and 79th minutes to make this victory one for the club's folklore.

On the night that celebrated the Sydney 2000 Olympics opening at the same venue 18 years ago, it seemed almost that long since the Rabbitohs played in a NRL preliminary final.

In fact it was only four years ago in the Rabbitohs' premiership 2014 season, when they met – coincidentally – the Roosters and won 32-22 before beating the Bulldogs in the grand final.

But after the searing physical game Anthony Seibold's men played eight days ago in their 29-28 loss to the Storm, some doubted they would have the spark needed to subdue the Dragons still on a high after their 30-point win over the Broncos last weekend.

On top of South Sydney having to lift once more, came the news 48 hours earlier that players from the club were being investigated by Souths over allegations of lewd behaviour on social media.

While all that was swirling around Souths, the Dragons had their own problems having lost their skipper and goal-kicker Gareth Widdop, to add to the absence of Paul Vaughan (foot) and Euan Aitken (hamstring), before then losing another NSW Origin forward in Tariq Sims for most of the second half.

Still it was the Dragons that were defying the bookmakers and tipsters early. They took an 8-2 lead into the sheds at the break.

Zac Lomax kicked a penalty to make it 10-2 and the Red V were well and truly on top before Reynolds pumped some energy back into the fatigued legs of the Rabbitohs with a try under the black dot in the 59th minute, then a penalty in the space of four minutes.

All of a sudden scores were level at 10-10 and momentum had swung 180 degrees.

Ben Hunt failed with a field goal attempt in the 69th minute but Reynolds succeeded with his a minute later and with 10 minutes left on the clock it was 11-10 to the Rabbitohs.

Reynolds had scored all his team's points at that stage, and in doing so had collated 200 points for the fourth time in his seven-year first-grade career. But he wasn't done for the evening.

After the Dragons grabbed back the lead through a Lomax penalty goal – he kicked four-from-four in Widdop's absence – Reynolds nailed his second field goal to level scores (12-12) and then kicked the game winner.

Immediately after doing so, Reynolds headed to the western side grandstand where the South Sydney members were seated. He didn't care there was still 15 seconds on the clock.

The match certainly had its mood swings.

After trading penalty goals early, the two sides settled into the arm wrestle. It stayed 2-2 until Hunt scored a fine 35th-minute individual try because the South Sydney defenders were keeping an eye on Tyson Frizell to the halfback's right.

That allowed Hunt to accelerate through a little gap for his first try in seven weeks – and a very welcome one at that.

The Dragons took a slim 8-2 lead into half-time. But the way the Telstra Premiership Finals series has been going, with two games already decided by a point, it could have been a season-defining lead.

The joint venture team also had a 100% record of winning all 12 games this year when they led at half-time.

But in the opening minute of the second half they lost hat-trick hero from last weekend Sims, with a right knee injury. He spent the rest of the match on crutches on the sideline.

Relieved Rabbitohs coach Anthony Seibold singled out young forward Cameron Murray for special mention after he stole possession back from Leeson Ah Mau deep in the Dragons territory ahead of Reynolds' sharp-shooting.

"It was a game changer," Seibold said of 20-year-old Murray's heads-up play, but he also couldn't overlook Reynolds' calmness under fire.

"Adam was on tonight. He scored all our points... very composed. Renno works very hard on his craft. I felt great for him. You get what you deserve and he deserved that tonight."

News & Notes: George Burgess had an HIA test in the 4th minute after head clash with his twin Tom and later returned to the field... Jeremy Latimore placed on report in 34th minute for up-ending winger Campbell Graham in a dangerous tackle... Tyson Frizell lost his boot in the 20th minute and played almost two sets before he could get it back off the trainer... Crowd: 48,188. 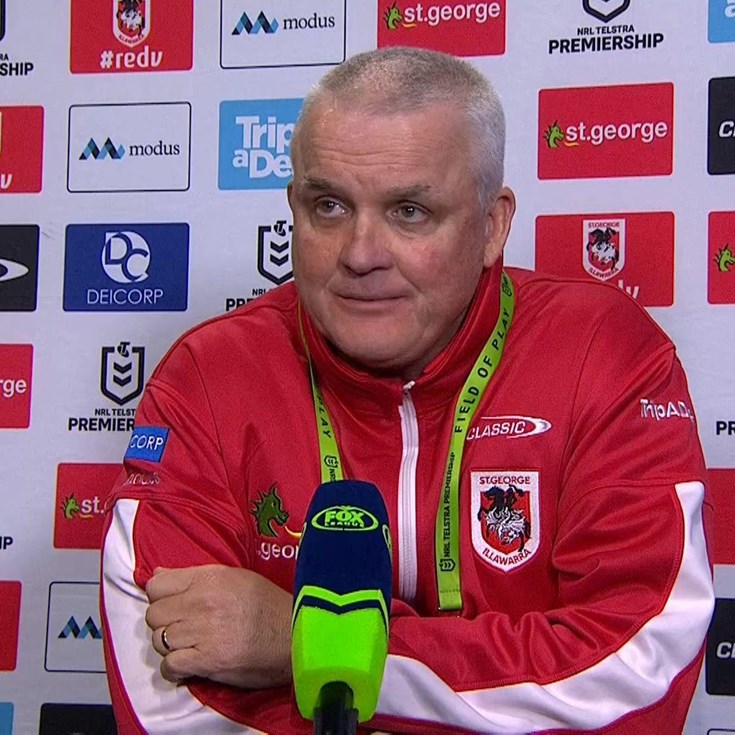