1. Alex Johnston
Showed good pace and evasiveness at the back and produced a first-half line break but wasn't really able to spark his side in attack. 6

2. Campbell Graham
Some strong early carries and bounced back well from a couple of knocks. Had ball stripped late ahead of Dragons go-ahead penalty. 5.5

3. Greg Inglis
Fairly subdued night from the skipper who was hardly sighted in the opening 40. Got more involved late as he looked to lift his team. 5.5

4. Dane Gagai
Arguably the best of the Bunnies back five; plenty of surging runs and really went looking for work. A key component of the solid right side defence as well. 7.5

5. Robert Jennings
Unusually quiet outing for the flanker on the end of the competition's most dominant edge but got through his yardage carries for 123 metres. 5

6. Cody Walker
Very busy in the first 15 then took a back seat as game wore on. Penalised late to hand Dragons the lead with five to go. 5

7. Adam Reynolds
Beautifully composed effort from the general who ended up scoring all his team's points. Kicked well from the back foot in the first half and combined beautifully with Crichton for a crucial second-half try and kicked three – yes, three – ice-cold field goals in a one-point win. A masterclass in game management that some on the other side could learn from. 9

9. Damien Cook
Typically industrious knock from the in-form rake with plenty of trademark shoots out of dummy half netting 152 metres and a big defensive workload with a team-high 42 tackles. One of only a handful of Rabbitohs to play well in both halves. 9

10. George Burgess
Early head clash with his twin but returned from HIA in head gear to knock out 115 metres. Got barely 20 minutes across three separate stints. 5.5

11. John Sutton
Cold drop to give Dragons a chance early and missed Hunt for opening try. One of many Bunnies who played much better in the final 20 minutes than the preceding 60. 4.5

12. Angus Crichton
Somewhat of a frantic performance from the Blues back-rower. Gave up some very costly penalties, one in possession, but greatly improved in second half. Great work to set up Adam Reynolds try and finished like a steam train. 7.5

13. Sam Burgess
Threatened to be another error-ridden game when he came up with a cold drop early but bounced back well in second stint with some good carries and offloads as Souths finished over the top. 6.5

15. Cameron Murray
Got on early for a George Burgess HIA and played another huge 200-metre spell off the bench. Late strip to help Souths get the level-up field goal was a massive play. Arguably the best of the Souths forwards. 8.5

16. Jason Clark
Just 24 minutes for the departing club favourite and spent most of it tackling. Pinged in possession for an incorrect play the ball. 5

17. Dean Britt
Got more minutes than last week when he spent 80 on the bench but not by much. Did nothing wrong in his 10 minutes on the park. 3

1. Matthew Dufty: Relatively strong at the back in defence, and when he touched the ball he was dangerous, asking questions of the Souths defence. 6/10

2. Nene Macdonald: Was the quiet achiever, making the most metres for his team. Also showed quick thinking to put opponent into touch after loose ball for a big first half play. 7

3. Zac Lomax: Was a confident display from the 18-year-old, who was prepared to try something different with attack; grubber kicking into in-goal and flick pass off-loading. However, execution often let him down. Was big in defence with 24 tackles and had a perfect goal-kicking rate. 6.5

4 Tim Lafai: Came out firing, sparking a minor scuffle after his high tackle on Angus Crighton, but was soon left stunned from a "crusher" tackle. Had a fairly low work rate with 10 runs and nine tackles. 5

5. Jordan Pereira: Seen as an inexperienced winger, he was tested in the first half under the high ball but stood up to the challenge. He was also good in defence, making some important tackles as Souths tested the right edge. 7

6. Kurt Mann: Had big shoes to fill in the absence of Gareth Widdop, but showed a really strong running game, often creating holes in the Souths defence. Made over 100 metres in attack. 7

7. Ben Hunt: Scored the game's opening try with a brilliant show-and-go. A mixed bag with his kicking game. Will rue his decision not to kick the ball long on the Dragons' final possession when they handed Souths the ball in crucial field position and Reynolds iced the game. 6

8. James Graham: Ran straight and hard as usual.The Englishman was just as valuable in defence with 37 tackles. 6

9. Cameron McInnes: Was kept fairly quiet in attack, especially in the first half, but made up for that with his defensive workrate, finishing with a team-high 49 – and didn't miss one. 6

10. Leeson Ah Mau: Was a mixed night for the prop; penalised for a high shot early, he only had four carries in his opening stint. He still had 38 tackles, and was the only Dragons player to concede two penalties. 5

11. Tyson Frizell: He was dazed early in game but quickly recovered, showing his ball handling skills to create a dangerous counter attack. Made a very important play late in the match with a strip that led to the penalty that gave his side the lead with a few minutes remaining. 8.5

12. Tariq Sims: Suffered a knee injury early in the second half and was forced off the field, from which he did not return. 5

13. Jack De Belin: Was again dangerous in attack, good counter attacking skills and speed to put Dragons in dangerous positionthat led to opening points for his side. Had a high work rate with 15 runs for 123 metres, and 39 tackles. 7

14. Jeremy Latimore: Came on midway through the first half and a clumsy challenge on Campbell Graham landed him on report. Was solid in defence with 24 tackles from his 33 minutes on field, but just eight runs. 5

17. Luciano Leilua: Came on straight after half-time to replace the injured Sims, but was kept fairly quiet, with three runs and 12 tackles. 4.5

19. Jai Field: Had very limited game time, with just nine minutes, which led to very low numbers, but did the job he had to do. 3 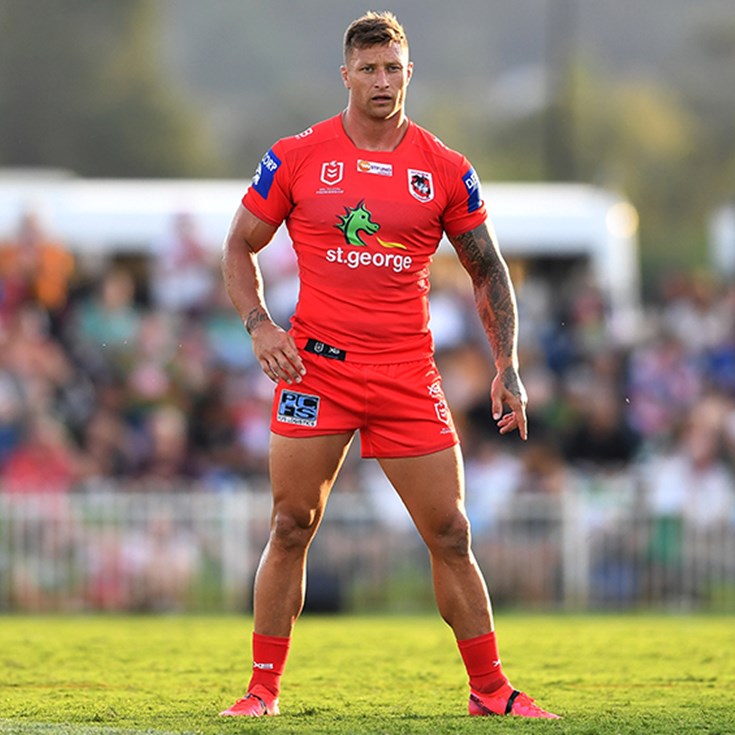 Dragons back loan system but wary of wounded Warriors

Sponsored By St George 3 weeks ago