The St George Illawarra Dragons have clung on to take out a 15-14 victory over the Canterbury-Bankstown Bulldogs in a thrilling Intrust Super Premiership NSW match at WIN Stadium.

For the second time in season 2018, a late Darren Nicholls field goal proved the difference as the Dragons wrestled back a deficit late in the contest. Five-eighth Adam Clune - filling in for the injured Jai Field - also performed well in the victory, while centre Reuben Garrick and lock Hame Sele each had their moments in the win.

After an expansive open period, the Dragons ensured they were first on the scoreboard when young guns Reece Robson and Zac Lomax combined; the talented No.9 picked the ball up at dummy-half on the Bulldogs' 40-metre line, making a bust before sending the ball right to his centre, who finished the movement. With Darren Nicholls' conversion, the home side was up 6-0.

The Bulldogs' first real opportunity came via Jack Nelson who, after a number of tackles on the Dragons' try line, broke through under the posts. The second-rower was held up, however, in a let-off for the Dragons.

When Mitch Allgood went down with a knee complaint shortly after, it brought an extended break in play - and the 29-year-old prop would not return to the field. Upon the resumption, an infringement in the ruck from Lachlan Burr gifted their opposition a penalty in front of the posts - with Darren Nicholls successfully taking the two points.

Four more minutes passed before the Bulldogs were able to score their first points, with captain Asipeli Fine stepping in to cross the line. It came via a short ball from Josh Bergamin, before the second-rower crashed past Lomax in a try which was later converted.

The Bulldogs looked certain to have earned a quick-fire brace of tries and score immediately after, with an extended run of play which saw a fleet-footed Cleeland find Bronson Garlick and then Tom Carr in the north-eastern corner. The speedy winger, however, mistakenly stepped onto the sideline in the final moments, an error which was picked up by the sideline official.

When the visitors looked again to build pressure shortly after, they conceded a rare scrum penalty deep in the Dragons' end - but followed it up with a period of brave defence on their line. On the back of their efforts without the football, they made the most of their final opportunity with it, with Burr scoring a four-pointer to give his side the lead. With less than 90 seconds remaining in the half, the 25-year-old ran a good line from first receiver to get past Patrick Herbert and Damian Sironen, with Cleeland converting for a 12-8 half-time scoreline.

Once again, neither side was afraid to throw the ball around at the start of the second half, with multiple errors featuring in the opening exchanges. Eventually, back-to-back dangerous tackle penalties by the Dragons gave their opposition the chance to have a shot at goal, with Cleeland opening up the six-point advantage.

When the play opened up with the Dragons on the attack, a dropped ball from Steven Marsters in open space saw an opportunity squandered, before a penalty considered by Hame Sele gave the Bulldogs more healthy field position. The Dragons lock immediately made up for his mistake, however, coming up with a crunching tackle on Jayden Okunbor and wrestling back momentum.

The moment would be crucial, with some enterprising play soon drawing the home side level. Nicholls found Adam Clune, who sent a brilliant cut-out pass to Reuben Garrick - and the centre's overhead catch and spin to finish off the movement was equally impressive. When Nicholls converted from out wide, the score was 14 points apiece.

In the blue-and-whites' next period of attack, Morgan Harper claimed to have planted down a Tom Carr grubber at the end of another fine play, but was ruled to have tapped the ball forward in the process.

A Darren Nicholls field goal proved to be the difference in the Dragons' 21-20 win over the Bulldogs in Round 10 - and the St George Illawarra halfback wasted no time in adding the one point again. Calmly splitting the uprights from 15 metres out, the Dragons edged ahead with 10 minutes remaining.

The home side had the majority of possession in the final 10 minutes, with Nicholls twice going close to scoring the match-winning try. While the four-pointer wasn't to be, the Dragons held on for a thrilling 15-14 victory. 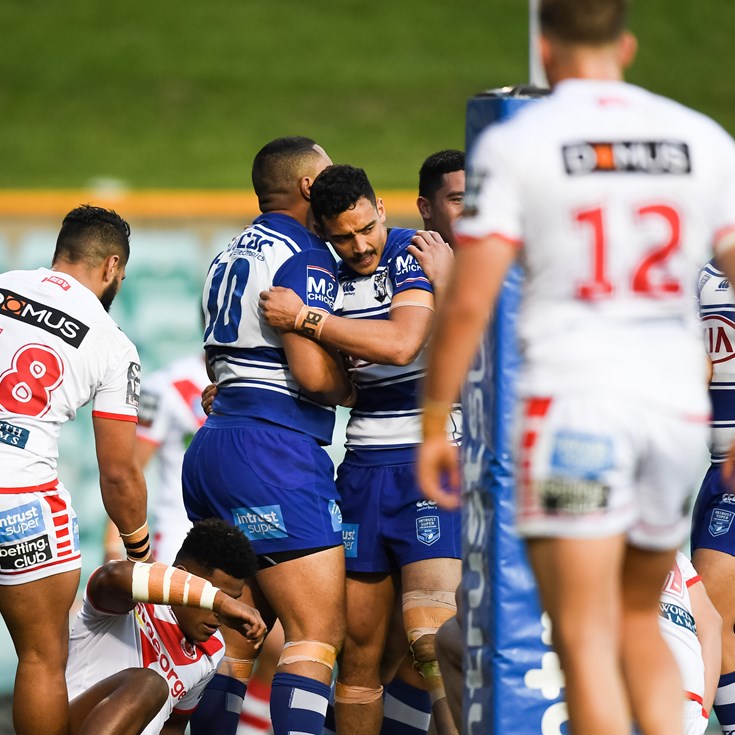