Paul McGregor's new playmaking spine may have bent itself out of shape at times, but already the St George Illawarra Dragons coach is spruiking its upside after revamping his attack over the summer.

Fullback Matt Dufty outshone high-priced halfback recruit Ben Hunt as the Dragons eventually got past a plucky Hull outfit 24-18 on Saturday night, with the Red V offence firing on occasion, and floundering at others.

But with Dufty's eye-catching turn of pace and Hunt's composed kicking game the key take-aways, the Dragons see an extra ball-playing option and more opportunities for skipper Gareth Widdop as the eventual pay-off of their overhaul in 2018.

The No.1 jumper vacated by Josh Dugan is now Dufty's to lose ahead of the March 8 season opener against the Brisbane Broncos, with McGregor highlighting the youngster's playmaking abilities when chiming into the backline.

"We've certainly got a better mix with how we attack from the centre of the field," McGregor said.

"Obviously Dufty can cover a lot of ground so he can actually float in between both edges, especially when the ball goes long he can get across the back on the next shift.

"Whereas Josh is more of a power runner and a very dangerous runner of the footy. It gives us another option to ball play at the fullback position which is something we haven’t had in the past."

Hunt also had his moments, particularly off the boot with a couple of tries from his kicks denied by the video officials, while he also combined with Widdop down the left edge to send winger Nene MacDonald over.

Widdop and McGregor were circumspect about the first outing for the star halves pairing, but remained confident Hunt's addition will eventually unleash the English international's running game.

"It's going to take a little bit of time, but we’ve worked extremely hard throughout the pre-season," Widdop said.

"He's been brought to the club for a reason. He's a good kicker of the football, he can organise and he can free me up a little bit. I thought we worked ok at time times tonight and we'll be better for the run tonight that's for sure."

McGregor confirmed the Dragons have no injury worries out of their first game for 2018, with Tyson Frizell and Jack de Bellin to be added to the teamsheet for next week's Charity Shield clash with South Sydney Rabbitohs in Mudgee.

Mann of the moment 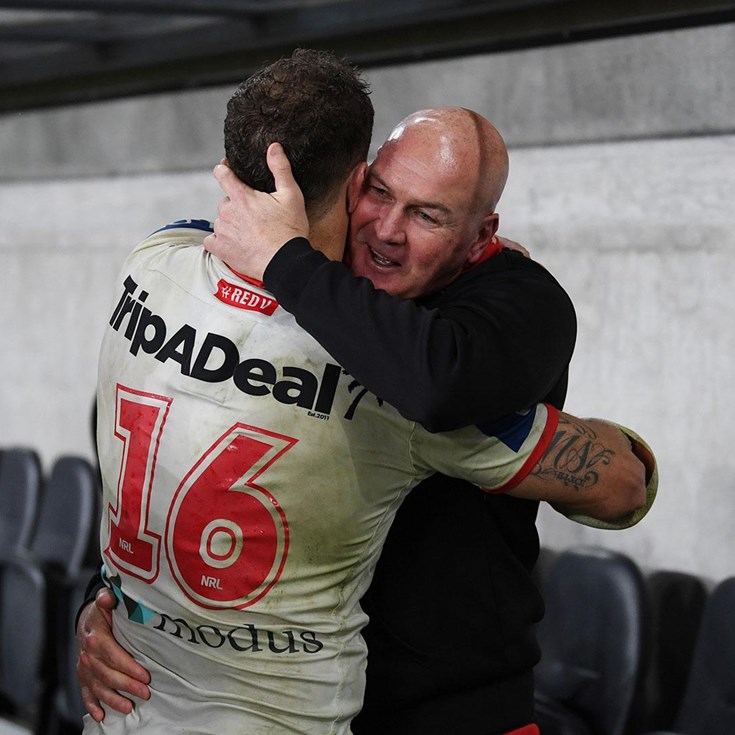 'I was shocked': Dufty wanted to challenge Bunker decision

Time to raise the physicality: McGregor