Both St George Dragons Junior Representative teams were unable to start the regular season with a win against the Cronulla-Sutherland Sharks at Remondis Stadium, Cronulla on Saturday.

The first-round local derby was a slippery affair and the wet conditions contributed to two low-scoring encounters that were riddled by handling errors.

The Dragons Harold Matthews side (U16) failed to start the season the way they would have liked, an eight-point losing margin not quite representative of the Sharks’ dominance in the four-tries-to-two defeat.

Despite scoring the first points with a converted try, the Dragons were unable to maintain their lead heading into the second half, with two unconverted tries to the Sharks resulting in an 8-6 half time scoreline.

Ten minutes into the second half the Sharks inflicted more pain on the visitors with a strong run earning points on the right hand side of the posts, which was converted to establish a 14-6 lead.

As the skies opened up it wouldn’t stop the Dragons from playing ad-lib football; a chip-and-chase was almost successful in getting them back in the game.

It was the simple plays that seemed to bring more errors, however, and after being gifted two consecutive penalties and a full set on the Sharks’ line, a dropped ball saw the home side surrender another opportunity.

When a Sharks junior was tackled late after putting a kick up tensions were at their highest, but Cronulla remained composed to execute a perfect left-side sliding play to score soon after.

With just five minutes remaining the conversion from the sideline was missed, and when the Dragons scored in their own left corner two minutes later they needed to convert to be any chance of a miracle comeback.

Another missed conversion in difficult conditions meant scores remained 18-10 at full time and the Dragons must wait until at least Round 2 to post their first win of the season.

It was then the SG Ball sides’ (U18) turn to kick off their seasons, and the Sharks did so with a kick that landed well past the dead ball line.

Unable to make the most of the field position immediately, the Dragons were then lucky to hold on the following set, with only an in-goal fumble preventing a Sharks try.

It was just the fifth minute, however, when the Dragons’ left centre took a cut-out pass to register the first points of the match – the try unconverted to leave scores 0-4.

The Sharks built pressure on the Dragons’ line for the next ten minutes, eventually outnumbering the visitor’s right side defence and sending the winger over for a try, which was also unconverted.

Earning four consecutive penalties on the Sharks’ line, St George eventually decided to take the penalty kick to pull in front – which looked to be the half time score until a Cronulla second-rower took the line on and came up with points in the final minutes of the first half.

With another kick missed, the Sharks lead 8-6 at the break and scores remained that way until the Dragons’ captain dummied and dived over for the first converted try in the 48th minute.

After a 100m set and a forced line drop out the Dragons seemed well on top, but when Cronulla’s halfback cut through next to the posts for a simple conversion, it was game on with six minutes remaining.

The Dragons regained possession from the kick off but were unable to close the two-point gap, a Sharks line break sending the centre over on full time for an 18-12 lucky escape.

While the Harold Matthews side will look to recover from a more one-sided encounter than the 18-10 scoreline would indicate, the St George Under 18s will be disappointed that they were unable to secure a victory earlier in their first SG Ball match-up.

Both sides will have hopes of strong performances against the Illawarra Steelers when the two clubs meet on Friday – at WIN Jubilee Oval, Kogarah at 6.00pm (Harold Matthews) and 7.30pm (SG Ball) respectively. 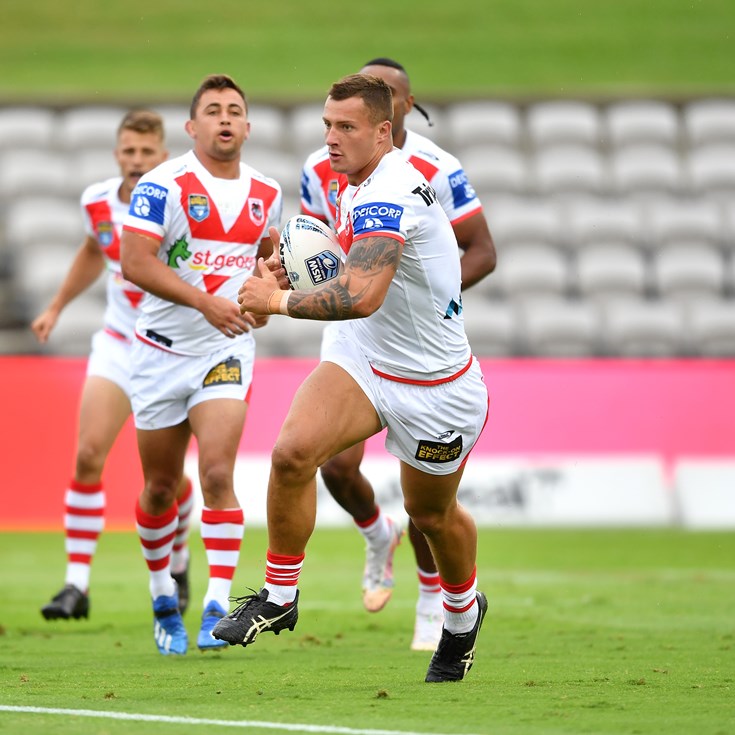