The St George Illawarra Dragons will face the Canterbury-Bankstown Bulldogs at Stadium Australia on Monday, June 14. This is your Round 14 game guide.

Half century for Norman

There is no concern for Norman's fitness despite the 30-year-old coming off early in the Dragons' last start win to the Brisbane Broncos.

Age will hopefully not weary his teammate Tariq Sims, who is bound for State of Origin I in Townsville on Wednesday night.

How Sims recovers from Game One five days on will determine his availability for the Bulldogs clash. He currently sits in the Red V's wider squad for the Queen's Birthday Monday clash.

Dogs double down on hookers

The Bulldogs may sit at the bottom of the NRL Telstra Premiership ladder but it isn't through a lack of fight.

The Dogs had a hard-fought 30-4 loss to the previously undefeated Penrith Panthers a fortnight ago, a better outcome than that faced by the Titans and Rabbitohs before them who copped 50 points each from the mountain men.

Helping their cause in Round 14 is the timely return of hookers Jeremy Marshall-King and Sione Katoa who return from a foot injury and suspension respectively.

Previously the Bulldogs were forced to utilise development player Jackson Topine and train and trialist Brad Deitz in the role.

St George Illawarra's succession planning in the coming years will lean on those who featured in the incredibly talented 2019 SG Ball Illawarra Steelers team.

You can't keep them all however, just ask Aaron Schoupp who lined up in the centres alongside Max Feagai in the Steelers' win over the Sea Eagles.

Schoupp now has two first grade games to his name and will line up again for Trent Barrett's Bulldogs team.

It was six years ago when former St George Illawarra utility back Peter Mata'utia was given 10 minutes notice to gear up for the Dragons' Queen's Birthday Monday clash against the Bulldogs.

Not only had the now Castleford Tiger played 24 hours earlier in NSW Cup, he also had a bellyful of KFC and Chinese to contend with.

"I found out I was going to play just after they finished the warm-up so I ran out while they prepared themselves in the sheds and warmed up by myself before anyone ran out," Mata'utia told NRL.com.

"I was on standby for the game but when I saw them warm-up I thought I was alright so I started eating KFC and Chinese food. I wasn't even thinking about it throughout the game but half-time was bad."

Mata'utia – who replaced Jason Nightingale in the 17 – had a day out in the Dragons' 31-6 demolition job of the Bulldogs. The Samoan international recorded 186 metres (the most metres made by a Dragon) and a four-pointer.

If you don't love* it when Ben Hunt boots the ball into the car park after he scores a try then you can't possibly be a diehard Dragons fan.

* The exception; the poor ball boys. 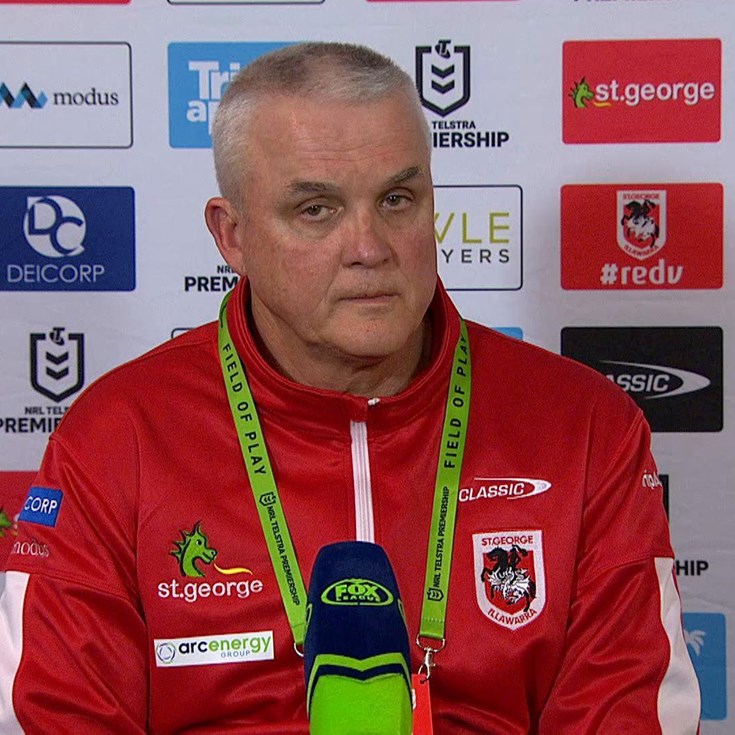