The challenge of a local derby could be just what Cronulla need as the club looks for a way to snap a six-game losing streak and arrest an accelerating slide out of contention.

The Sharks must relocate the grit and defensive resolve that has defined the club for so long because St George have built a brand of imposing themselves physically on opposition sides this season.

Cronulla will need a lot more of what veteran prop Andrew Fifita delivered in his first game of the season.

Cronulla's second-half fightback to get to within four points of South Sydney on Saturday is encouraging but interim coach Josh Hannay is looking for more, particularly better fifth tackle options.

A date with their arch-rivals won't be an easy assignment after the Dragons' gutsy display against competition heavyweights Melbourne despite being down a man for much of the contest.

Coach Anthony Griffin has instilled a lot of fight in St George Illawarra and while they will be looking for more consistency from week to week Griffin knows they won't lie down if things go against them.

That resilience will be further tested by the injury and judiciary consequences of their trip to Brisbane.

Sharks: Andrew Fifita is out, with Billy Magoulias added to the bench. Shaun Johnson was the other player omitted from the extended bench on Thursday night after failing to overcome his hamstring injury.

Franklin Pele is 18th man with Jensen Taumoepeau omitted from the playing squad on game day.

Dragons: St George Illawarra have reshuffled their team on game day. Talatau Amone starts at centre, Billy Burns moves to the bach row, Poasa Faamausili shifting to the front row and Paul Vaughan to the bench.

Cody Ramsey shifts from wing to fullback while Jordan Pereira returns from suspension on one wing and youngster Max Feagai is the other winger.

Prop Jaiyden Hunt has been named to make his NRL debut from the bench where he will be joined by second-gamer Junior Amone, Kaide Ellis and Daniel Alvaro.

Billy Brittain dropped out of the side on game day after Hayden Lomax and Gerard Beale were trimmed from the reserves 24 hours before kick-off.

The Dragons have won only two of their past seven games at Netstrata Jubilee Stadium.

Will Kennedy v Cody Ramsey: The Sharks No.1 has been one of the standouts in a tough season to date and his evasive skills will keep the Dragons on their toes.

Should the revamped Red V defensive combinations miss their assignments, Kennedy will make them pay. Ramsey is an up-and-comer with plenty of speed who finds himself shifted to fullback in the absence of the injured Matt Dufty.

He can expect plenty of high balls raining down on him as the Sharks kickers test him out.

The Dragons (344) and Cronulla (342) have missed more tackles than any other team in the competition while Sharks Toby Rudolf (42) and Chad Townsend (40) rank No.1 and No.2 in the individual category.

Whoever cleans up their defensive act best will be well on the way to victory. 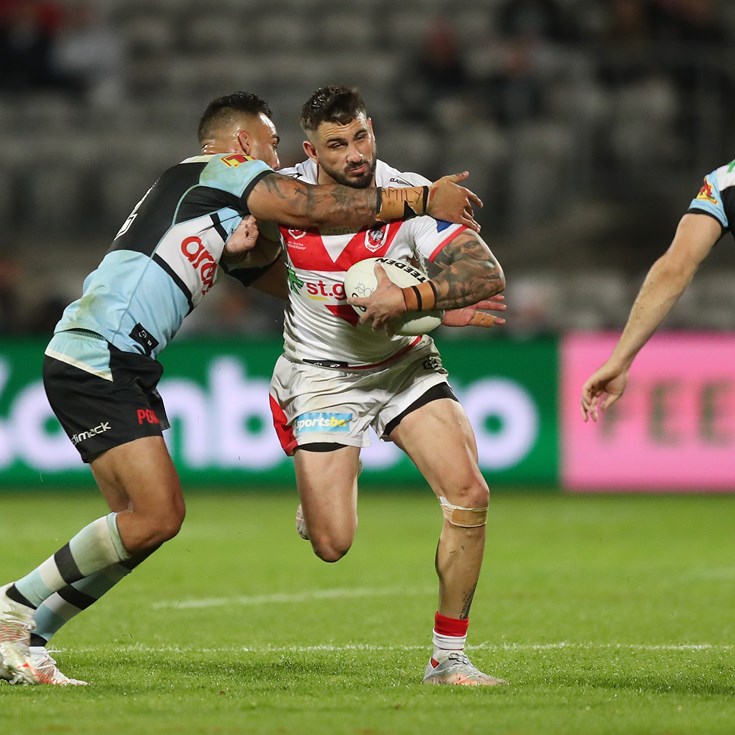 Golden heartbreak as Dragons fall to Sharks in thriller