The St George Illawarra Dragons will face the Melbourne Storm at Suncorp Stadium in Magic Round action on Sunday, May 16. This is your Round 10 game guide.

Never believe, it's not so

Whoa oh oh, it's Magic… Round, you know?

A Covid-19 casualty of 2020, the Brisbane-based competition round is back for a second time with all 16 teams to convene at Suncorp Stadium across a three-day rugby league bonanza.

There's still plenty of tickets available for the entire weekend, but more important for Sunday's main event between the Red V and Melbourne Storm.

If it helps entice you, the Dragons have won four of their past five games in Brisbane!

You can purchase your Magic Round tickets here.

Nobody knows whether the beloved Pacific Tests will occur in representative round in 2021.

If they are sadly given the flick then we'll have to settle with the tantalising showdown between Fiji and Papua New Guinea's brightest talents at Suncorp Stadium this Sunday.

Mikaele Ravalawa returns from a two-week suspension on the wing from the Dragons. Rumour has it Roosters centre Josh Morris is still picking his ribs out of the Sydney Cricket Ground surface.

Concrete centre Justin Olam will hold no fear over Ravalawa's return; a showdown that could very well become a defensive highlight reel of mass proportions.

The Storm depth will be well and truly tested come Magic Round given the cattle missing from their stellar line-up.

Brendan Smith (suspension), Harry Grant (hamstring) and Cameron Munster (foot) have all been ruled out. That's two State of Origin players and a New Zealand international!

Their 50-0 win over South Sydney Rabbitohs last Thursday seems a distant memory now, but the Storm always have a trick or two up their sleeve and this week it lingers in their reserves.

Ryan Papenhuyzen (shoulder) hasn't played in a hot minute but has been named in Craig Bellamy's 21.

Time will tell whether he plays.

Forget about this being photo of the week. This will be up there in the Photo of the Year category come season's end.

You couldn't wipe the excitement of young gun Talatau Amone's face on his way to the try-line for his maiden four-pointer on debut.

To think the young half was playing the SG Ball grand final eight days prior.

Furthermore on the Dragons' last start debutants Amone and Feagai, it has been 14 seasons since two St George Illawarra rookies scored in the same game on debut.

The Dragons' Round 1 win over the Gold Coast Titans (coincidentally their first game in the NRL) saw Richie Williams and Keith Lulia crash over on debut.

It hasn't been as long between drinks for Josh McGuire as far as wins are concerned but the dual Samoan and Australian international can finally say he's won a game in 2021, following the Dragons' 20-point win over the Bulldogs.

Matt Dufty's two tries against the Bulldogs sees him move closer to the 50 four-pointer mark (42) in first grade football. His 12 tackle breaks weren't too shabby either. 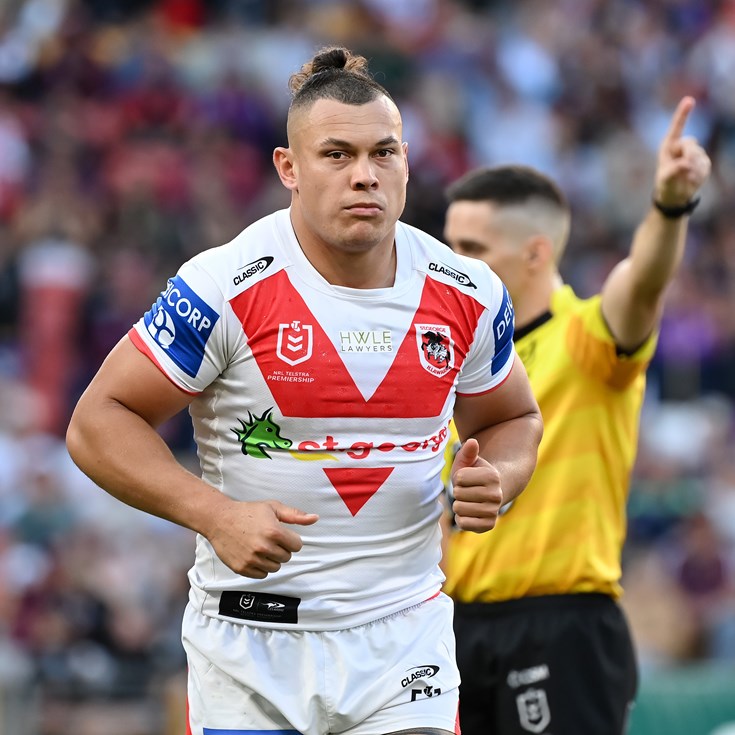