Two high-flying teams come together on Sunday evening with neither having tasted a loss since the Dragons' defeat to Cronulla back in round one.

Parramatta survived an Easter Monday scare against Wests Tigers to move to 4-0 alongside Penrith at the top of the ladder while the Dragons capitalised on an unfortunate injury toll to the Knights to record their third straight win.

The Eels are 2-0 at their Bankwest Stadium fortress so far this year but the Dragons took the points away last time they were here in round 14 last year.

Isaiah Papali'i comes into the second row and Ray Stone joins the bench.

After returning from a broken jaw via the NSW Cup last week, Bryce Cartwright is set to make his club debut off the interchange with Keegan Hipgrave making way.

Jordan Rankin was cut from the squad 24 hours before kick-off. Hipgrave was the last man cut an hour before game time and Haze Dunster is the 18th man.

The Eels are aiming for a 5-0 start for the second consecutive season.

Dragons: Jack Bird will return at centre from a one-game suspension, with Brayden Wiliame dropping to the bench and Jackson Ford to 18th man.

Reed Mahoney v Andrew McCullough: The Eels' No.9 has snuck under the radar as one of the form players of the competition after four rounds. His passing and kicking games have blossomed this year and he has been among his side's three best players every game so far.

Tackle-machine McCullough has been a critical cog for the Red V, providing reliable service to the forwards and proving an astute recruit so far.

The Dragons got the win last week despite making 16 errors against just seven from their opponents; they can't afford to do that again if they want to topple the co-ladder leaders on their home patch. 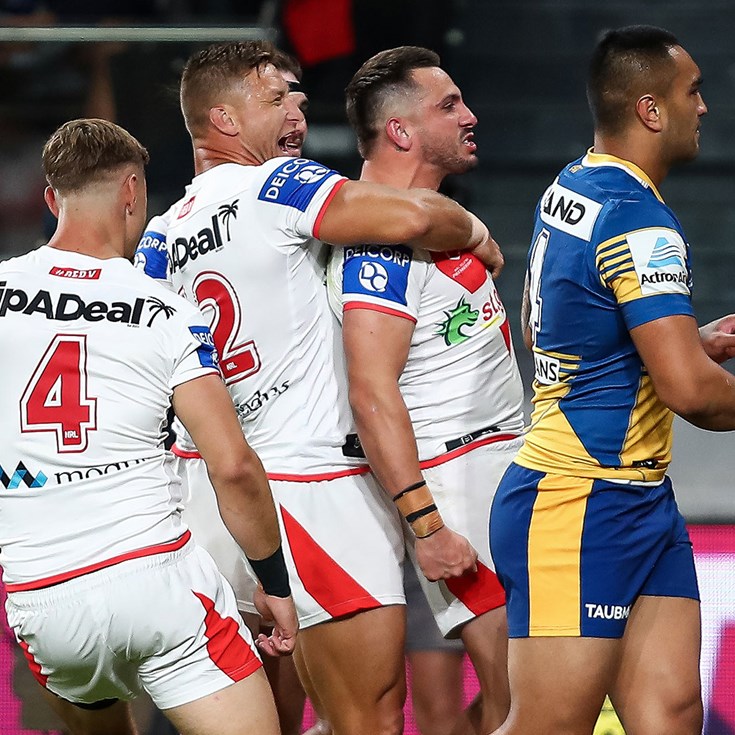