Adam O’Brien will struggle to name 21 healthy Knights to face Gold Coast next Saturday after losing playmakers Mitchell Pearce, Kurt Mann and Tex Hoy to injury in a bruising 22-13 loss to St George Illawarra at McDonald Jones Stadium on Sunday.

Pearce, who played his 300th NRL game seven days earlier, could be sidelined for several months after leaving the field in tears in the 25th minute suffering a suspected torn pectoral muscle.

Hoy is expected to miss up to four games with a torn hamstring and Mann was heavily concussed and is unlikely to play against the Titans.

Former NSW and Australian enforcer David Klemmer, who was reported for two incidents in the first half, will have scans on a knee injury suffered in the 60th minute.

Blake Green, returning from a knee reconstruction, played the final 30 minutes against the Dragons as O’Brien resisted the urge to play him for longer despite the injury to Pearce.

"I just had that conversation just then. I don’t think I’ll be able to name 21 [on Tuesday]," a shattered and shell-shocked O’Brien said.

"Naming the team is probably going to be a real big hurdle this week."

O’Brien said Pearce would have scans on Monday to determine the damage of the left-side pectoral muscle injury he suffered when grabbing out to tackle St George Illawarra back-rower Tariq Sims.

In his first season in Newcastle in 2018, Pearce was sidelined for nine games after tearing his right-side pectoral muscle playing against Wests Tigers in April. If scans reveal a rupture, rather than a partial tear, Pearce would be unlikely to return this season but O’Brien is hoping for better news.

"He’ll have scans – it’s the other one that he did previously – but they’re not looking good at all at this stage," O’Brien said.

Ponga met with his shoulder surgeon last week and was close to playing against the Dragons but O’Brien said he resisted that temptation and erred on the side of caution.

"We’re round four, and it’s pretty much carnage for us tonight, so I don’t need to add to that by making rash decisions now."

Shibasaki is there as Ramsey spills the kick

When Pearce left the field, O’Brien used Mann and Connor Watson in the halves to stick to his original plan of easing Green back into match play, but without Hoy after half-time the coach had no choice but to put Green into the game.

"I didn’t foresee that happening, but it was about doing the right thing for Blake, and not thrusting him in too early," he said.

"At the end of the day, the surgeon had ticked it off … but we just thought for Greeny’s confidence, it was the right thing to do and we stuck to the plan, but unfortunately Tex went at half-time and Kurt went straight after so we lost 7, 6 and 1 all pretty much [after] half-time."

Under normal circumstances, Klemmer would have probably been replaced after clutching at his knee when tackled by Sims in the 60th minute but O’Brien had few other options.

Sims charges down a Green kick and he has a double

"He jammed up his knee but he had to stay out there because we didn’t have anyone left – I think we had one on the bench the whole second half," he said.

The Knights led 7-6 at half-time and 13-6 when prop Josh King crashed over to score eight minutes into the second half but, with their playmakers sidelined and their forwards being bullied by a determined and aggressive Dragons pack, they never looked like protecting their lead.

O’Brien said he could not fault their courage or commitment and encouraged supporters to keep the faith despite the immediate future looking so grim.

"I think our members, sponsors and fans can rightfully walk away disappointed with the scoreboard but I don’t think you can walk away with the character shown by the team," he said.

"I’ve seen teams get beat by 40 and 50 this weekend that haven’t gone through the resilience that that team just went through, so I am proud of them.

"They’ve got heart, they’ve got character, and that will hold us in good stead long term. We’ll get injured guys back, but the foundations of a footy team long term need to be to dig in and have a go no matter what goes against you.

Sims steams onto a Clune pass

Newcastle’s last chance came and went when Hymel Hunt touched down in the corner in the 75th minute only to have the try called back because Mitch Barnett’s final pass was ruled forward.

Sims scored two tries against his old club, with the second of those coming from his second kick chargedown of the game.

Written off as wooden-spoon contenders by pundits and punters alike during pre-season predictions, the Dragons have won three straight since dropping their first game against Cronulla. 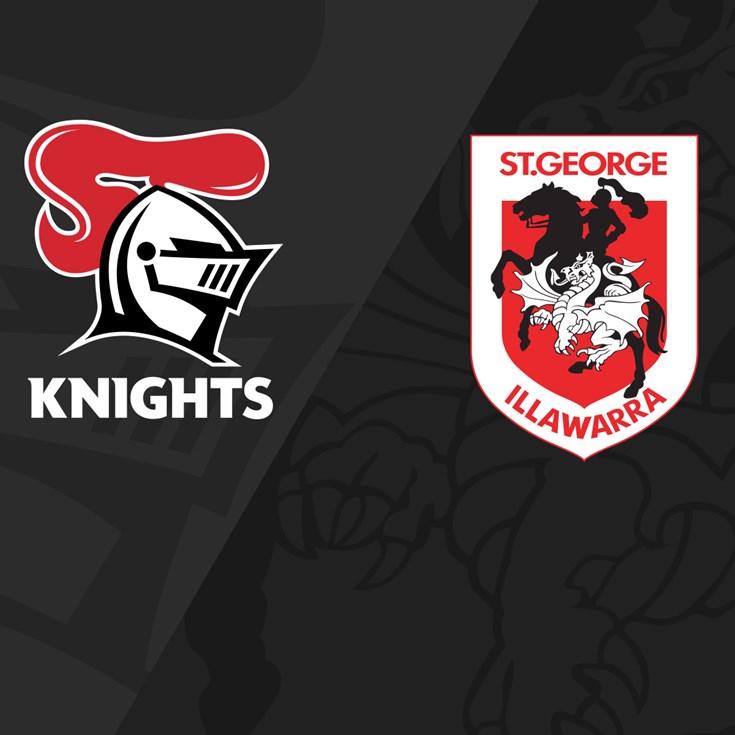