The St George Illawarra Dragons will face the North Queensland Cowboys at Queensland Country Bank Stadium on Saturday, March 20 (7:30pm). This is your Round 2 game guide.

Corey Norman was forced to watch on from the sideline against the Sharks but has been ushered straight back into the Dragons' 17 to face the Cowboys.

Coming at the expense of Adam Clune, coach Anthony Griffin has named an unchanged team otherwise to tackle North Queensland in Townsville.

Todd Payten has ignored critics of his team's Round 1 tactics by naming the same 17, including Scott Drinkwater and Michael Morgan at fullback and five-eighth respectively.

How Jason Taumalolo's minutes are impacted by the criticism faced by Payten and Cowboys also remains an intriguing sub-plot to this Round 2 clash.

The Dragons have secured an early coup for season 2022 after signing Cowboys powerhouse Francis Molo on Tuesday.

The Cook Islands international will play his 59th first grade game this weekend, coincidentally against the Dragons, having not missed an NRL game for North Queensland since late-2018.

Molo is coming off a career year for the Cowboys in 2020 where he averaged 116.7 metres and is certainly one to watch this weekend in anticipation for next year.

Dragons 2010 premiership-winner Dean Young will come up against St George Illawarra for the first time ever this weekend.

The undeniable club legend Young had the opportunity to remain at the Dragons in 2021 under Griffin but opted for a change of pace in Townsville with Payten's Cowboys.

Young had the opportunity to coach the Dragons late in 2020 following Paul McGregor's departure, including a 23-22 golden point loss to North Queensland.

This time around however the fifth-most capped joint venture Dragon will be hoping for a similar result from Valentine Holmes and co.

Ben Hunt's two try assists and improved running game proved vital for the Red V in their attempted comeback against the Sharks on Sunday night.

Hunt's best mate Andrew McCullough proved a brick wall in defence in his Dragons debut, making 64 tackles (for one miss) in a complete 80-minute performance.

Up front, Blake Lawrie and Paul Vaughan combined for almost 300 metres and a whopping 11 tackle breaks.

Matt Dufty took the good with the bad against the Sharks. 160 metres, seven tackle breaks and a thrilling try looked good on his Round 1 resume but the same can't be said about his five errors.

While the boys shall travel north this week, Wollongong Mall will be painted red and white in support for four days starting this Thursday.

Not only will you be able to sign up for a Red V membership and buy merch, there will be a range of giveaways and prizes each and every day. Prizes include a signed jersey, corporate hospitality tickets and the opportunity to flip the coin at our Round 3 clash against Manly-Warringah at WIN Stadium, Wollongong. 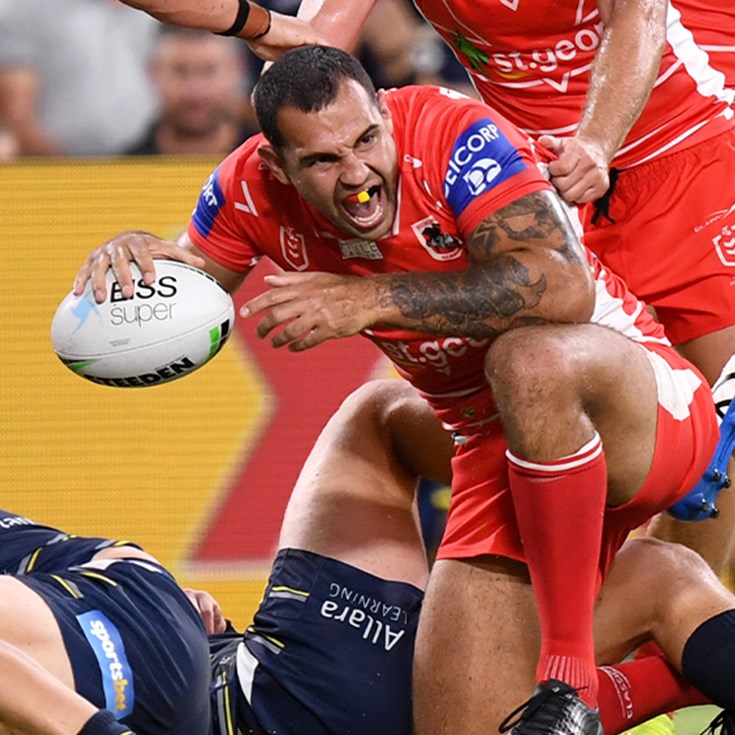