Adam Clune's growing influence over the Dragons is reaping rewards for those sharing his side of the field.

With Ben Hunt named at hooker and Cameron McInnes at lock for St George Illawarra's match against Manly on Sunday, centre Euan Aitken said Clune's growth was helping everyone around him.

Clune made his NRL debut in round four against Canterbury and his confidence has risen with each of the five matches he has played in the No.7 jersey.

During that time Hunt has been having an impact at dummy half from the interchange.

While signed as a halfback, Hunt is the incumbent Queensland hooker and has played as a bench utility for Australia because of his dummy-half skills.

Dragons coach Paul McGregor had been reluctant to move Hunt to hooker full-time as captain Cameron McInnes is regarded as one of the NRL's best No.9s. The pair have been sharing the dummy half for the last four weeks.

Hunt played 59 minutes in last weekend's 22-16 loss to Canberra, with McInnes shifting to lock, and he made 55 metres and one-line break from five dummy-half runs, as well as 37 tackles.

McInnes made 66 tackles and ran the ball for 121 metres from 16 carries, including one dummy-half run.

Round 9 - Hunt, Thompson to start while Munster may return

With Clune controlling the game at halfback, McGregor is now more comfortable about starting Hunt at hooker and he revealed last week that the move had been discussed by the club's new selection panel.

Centre Euan Aitken was full of praise for 25-year-old Clune on Tuesday.

We have changed up our attack a little bit, we are starting to get early ball to the centres

Euan Aitken on changes at the Dragons

"I have got nothing but wraps for Cluney. He is a little general," Aitken said.

"He is a great talker, he is a leader on the field and the way he has stepped into the team and is starting to lead the team around as well, he is slowly earning trust in the team."

Aitken defends on the left edge alongside Clune and they are set to be joined for the Manly game by second-rower Tariq Sims after his recovery from a thumb injury, while winger Jordan Pereira returns from suspension.

"I usually play on the right so I am starting to form a good combination on that edge with Cluney and we have got Tas coming back as well so it is going to be a strong edge there now," Aitken said.

"We haven't had too many tries down our edge in the last four games and we are just trying to improve on that. They have only scored off kicks in four games, which is impressive."

Team-mates regarded Aitken as St George Illawarra's best player in Canberra and he ran 221 metres with the ball.

The off-contract centre, who just two years ago was being touted for NSW Origin selection, revealed the Dragons had changed their attacking style since Clune took over at halfback.

"We have changed up our attack a little bit, we are starting to get early ball to the centres and that is what you want," Aitken said.

"In past games, early on [this season] and at the back end of last year. we just weren't as fluent in attack and it was a lot more stagnant so sometimes the ball wouldn’t get out there and I wouldn’t even touch the ball in good [position] or in transition to attack.

Clune wants to be more dominant in halves

"Having Cluney there, I am getting a bit more clean pill and that allows me to get one-on-one with defenders and I back myself each time with that because I feel like I am a strong player."

The Sea Eagles will again be missing star fullback Tom Trbojevic and five-eighth Dylan Walker due to injury, while prop Addin Fonua-Blake has been suspended.

Despite those absences, Aitken said halfback and captain Daly Cherry-Evans was still a danger.

"They are obviously missing Turbo which is a big loss for them but they have still got a crafty half in Cherry-Evans so we have got to be on, especially as he is on our side on the left edge," he said.

"If we can nullify his attack I think we will go a long way towards winning." 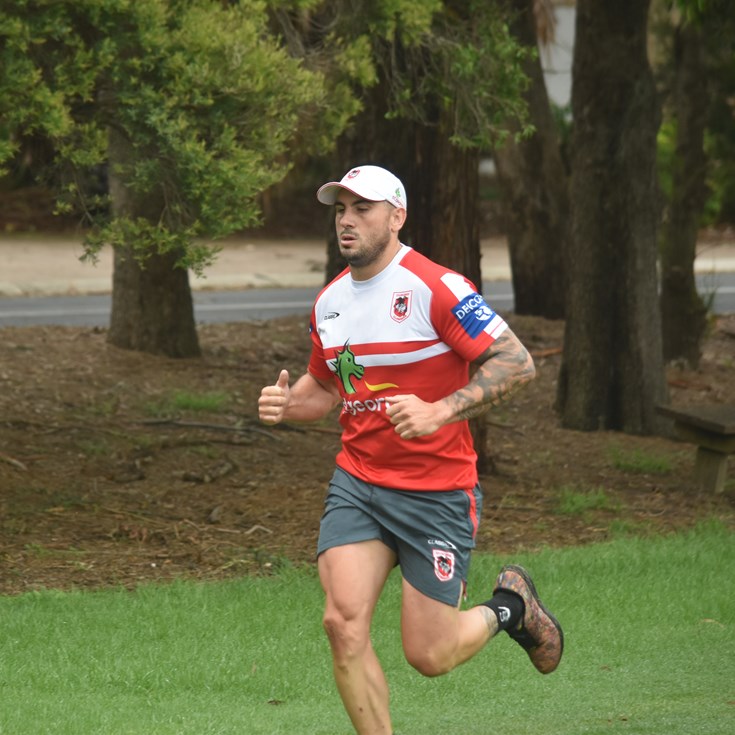 'All Cam wants to do is win': Clune form to keep McInnes at lock