St George Illawarra will be looking to build on a dogged performance against last season's grand finalists Canberra when they take on the Sea Eagles.

The Dragons fought back from 22-0 down with three late tries and will be intent on carrying that momentum into their clash with Manly to give themselves every chance of notching their third win of 2020.

Manly find themselves outside the eight after a frustrating loss to the Knights at Lottoland in which their defence looked its old self after an uncharacteristically sloppy showing against the Sharks but their attack failed to fire in the absence of Tom Trbojevic.

With all the pressure on skipper Daly Cherry-Evans to produce points he will be looking for play-making help from Lachlan Croker and Cade Cust.

Dragons: The Dragons will start 1-17 after Tim Lafai and Tristan Sailor were the last two players omitted. Tariq Sims is back from a wrist injury in the second row, pushing Tyrell Fuimaono to the bench. Ben Hunt starts at hooker with Cameron McInnes in the No.13 jersey and Trent Merrin back to the bench. Jordan Pereira replaces Jason Saab on the wing. The Dragons have won four of their past five games against the Sea Eagles.

Saab and Korbin Sims were omitted from the extended squad 24 hours before kick-off.

Sea Eagles: In a major re-shuffle announced an hour before kick-off, Brendan Elliot (No.19) will start at fullback, Rueben Garrick on the wing, Cade Cust (No.14) at five-eighth and Morgan Boyle (No.17) at prop. Tevita Funa (No.5) and Corey Waddell were the two players dropped from the squad. After being named to start on Tuesday, Taniela Paseka and Lachlan Croker will start the match on the interchange bench. Abbas Miski and Haumole Olakau'atu were cut from the reserves 24 hours before kick-off. Coach Des Hasler has a 7-2 record against the Dragons’ Paul McGregor.

Matt Dufty v Brendan Elliot: Dufty has been one of the few bright spots for the battling Dragons, hailed by coach Paul McGregor for his blossoming partnership with Cameron McInnes and rookie half Adam Clune, while Elliot has been given the job of filling the very large boots of Tom Trbojevic.

The Dragons lead the NRL in kick metres, with 5132 over the opening eight rounds. While that may suggest they struggle to get out of their own half when given possession, the next three teams on the list (Canberra, Penrith and Parramatta) are all enjoying strong starts to 2020. 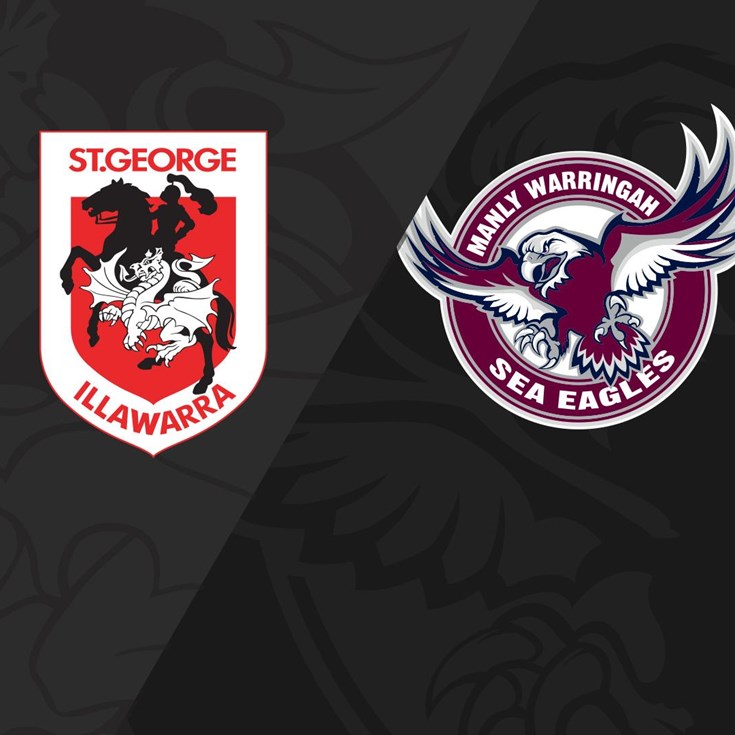 Dufty finishes off a Lomax intercept