At the start of the season, Bottille Vette-Welsh’s list of goals didn’t include playing State of Origin, starring in the NRLW, being a finalist for the Dally M and RLPA player of the year awards or earning selection for the Jillaroos.

“This was my fun season, I was just going to play for fun this year,” the St George Illawarra fullback said.

Vette-Welsh was a member of the inaugural Wests Tigers team in the Harvey Norman NSW Women’s Premiership and joined the Dragons as a virtual maternity leave replacement for Sam Bremner during this year’s NRL Holden Women’s Premiership.

Not only did Vette-Welsh wear Bremner’s No.1 jersey with distinction, but the 23-year-old has filled the vacant spot she left in the Australian squad for the World Cup Nines and October 25 Test against New Zealand at WIN Stadium.

“Sam is a part of the Dragons,” Vette-Welsh said. “She was at a few of our training sessions and she was talking to me from the back, and giving me heaps of advice and tips. She was amazing.

“She is one of the most incredible fullbacks. We were watching some of the video from the Nines a few years ago and just her efforts and her energy on the field were just crazy. She is definitely someone to listen to.”

The encouragement from Bremner and advice from Dragons coach Daniel Lacey paid off with Vette-Welsh being rewarded for her devastating performances at fullback in the NRLW with one of five nominations for finalists in the Dally M and RLPA Player’s Champion awards.

St George Illawarra team-mate Jess Sergis took out both awards but just to be considered so highly by the Dally M judges and her fellow players who vote for the RLPA award took Vette-Welsh by surprise.

“When I think of the Dally Ms I think of Simaima [Taufa] and Kezie [Apps] and all of those incredible players so for me to be nominated, I thought it was so cool,” she said.

“I went to the Tigers and we started with a team that had no rep players, we kind of went from nothing to coming third in the Harvey Norman comp and then I made National Championships [with NSW City] and then State of Origin, and now this.

“None of those things were on my list to-do at the start of the year but obviously when you have fun you probably play your best footy.”

Penitani set to pull on green and gold in third sport

After her stunning break-out season, Vette-Welsh doesn’t want to change anything in 2020 and hopes to be back with the Dragons and Tigers.

“I am haven’t thought much about next season, I am just happy finishing off this season at the level I am, it’s been incredible,” she said.

“I had a lot to learn when I went to the Dragons and I honestly came out knowing so much more than I have ever learned in the last couple of years that I have played footy so I was so grateful for that.

“Hopefully I will get another crack at the Dragons and I will be sticking with the Tigers for the Harvey Norman so hopefully it will be just as good as this year.” 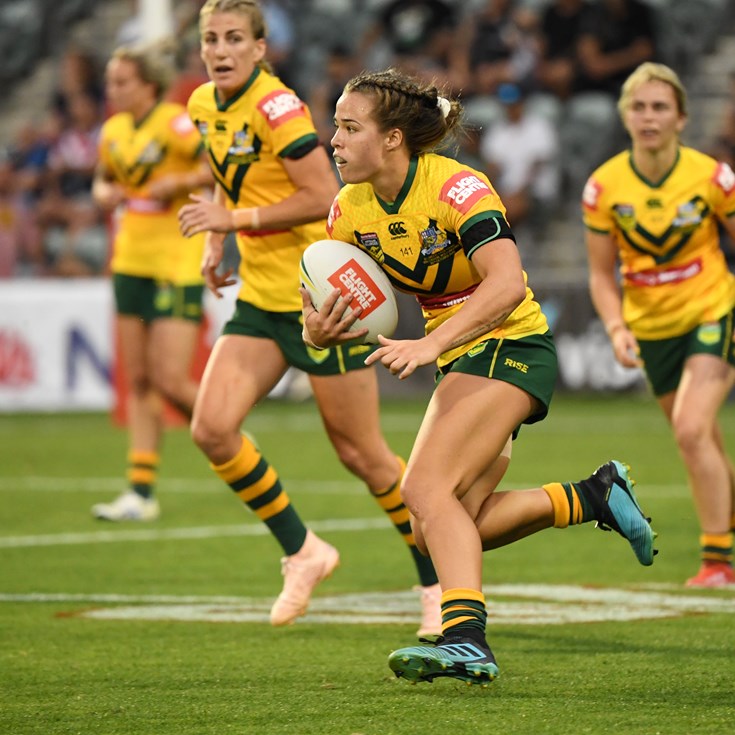