Who will win the 2019 NRLW grand final? Can the Broncos make it back-to-back premierships or will be Dragons get the job done.

The experts at NRL.com have their say on who which team will be celebrating on Sunday night.

The Broncos will go back-to-back because their forwards are disciplined and just grind the opposition into the ground. Out wide they have rampaging backs like Amber Pilley who is devastating close to the line. The Broncos have impressed me as the best-drilled team in the competition and particularly in defence where they give away nothing. Broncos by 4

Broncos. As they did last year when the won the premiership they've played with consistency. They've got two ex-NRL players (Corey Parker and Simon Mannering) helping with the coaching and having been there last year they'll be ready. Broncos by 4

Ali Brigginshaw is the world's premier halfback. Her experience will prove vital. She will steer her side to victory. Broncos by 2

Brisbane will bounce back with a far better performance after suffering their first NRLW loss last week and have experience on their side but the Dragons have created the momentum and won't be overawed. Dragons by 8

This is virtually a State of Origin match as the Broncos had nine Queenslanders in their 17 last weekend against the Warriors, while the Dragons had eight rep players in their 17 at Leichhardt Oval against the Roosters. Brisbane already have an NRLW premiership so let's spread the love. Dragons by 2

The Dragons. Back-to-back wins gives them the momentum heading into the grand final. The Red V turned a corner in the second half of their round two match against the Warriors – and haven't missed a beat since. If their forwards can dominate the middle, Maddie Studdon will take control and link with their strike weapons on the edge in Jess Sergis and Tiana Penitani. Dragons by 8

The Brisbane Broncos are a class above the rest of the pack, however, the Dragons have hit their straps at the right time. The Dragons would have learned some valuable lessons from the first loss of the season and expect them to make the adjustments needed to deny the Broncos going back to back. Dragons by 4

The Dragons have looked potent during the past fortnight while Brisbane are coming off their first-ever NRLW loss. I just see the Broncos having a touch too much polish. Brisbane by 4

They may have lost last weekend, but the Broncos have been the best team the NRLW has seen over its first two years. They're good enough to get over the line against a strong Dragons team. Broncos by 2

St George Illawarra. The Dragons only loss was a narrow defeat by the Broncos in the opening game and since then they have got better with each match. St George Illawarra have a mobile forward pack and strike across their backline. Dragons by 4

The Dragons look to be hitting their straps and realising their potential with big game players Kezie Apps, Jessica Sergis, Maddie Studdon, Maitua Feterika and Brittany Breayley all potential game-breakers. The Broncos will be favourites but the experience of the Dragons will get them home. Dragons by 4

The Dragons will have learned plenty of lessons from their loss to the Broncos in the opening round of the NRLW. They've improved each week of the competition since that day and can upset Brisbane at ANZ Stadium if they spin the ball out wide nice and early to their speedy outside backs. Dragons by 2

It may have taken the St George Illawarra Dragons a couple of weeks to click, but I'm confident we still haven't seen the best this team has to offer. The combination of Keely Davis and Maddie Studdon is working well for the Dragons and added to the attacking potential of the likes of Jessica Sergis and Tiana Penitani. Dragons by 4

The Dragons will break the Broncos' domination of the NRLW and claim the title on Sunday. Pre-season favourites, the Dragons' combinations have improved during the competition and they will take the next step by defeating the defending premiers in a close match. Dragons by 1

The Dragons can definitely threaten the Broncos but I don't see the women from Brisbane dropping two in a row following their shock loss to the Warriors last week. Their forward pack is excellent and it should create plenty of space for for their halves and hooker. Broncos by 10

The Dragons had a slow start to the season but in the last two weeks they have found their groove. They will also be wanting revenge for not making the grand final last year so they'll be prepared to step up to the occasion on Sunday. On the edges is where they will win this match - watch out for Jess Sergis and Tiana Penitani. Dragons by 12

Brisbane have been the most successful team in the short history of the NRLW and they will have the bounce-back factor on their side after suffering their first NRLW defeat last week. The Dragons have plenty of stars and should be competitive. Brisbane by 4

St George Illawarra were below their best in round one but still managed to compete with Brisbane for most of the match. While the Dragons have now hit form, the Broncos' confidence may be shaky. Dragons by 8

Last week's loss to the Warriors will only be a hiccup for the Broncos. Return of Meg Ward on the wing is a bonus and the experience of Ali Brigginshaw will be crucial in their pursuit of a second straight NRLW title. Broncos by 2

When the Dragons have switched it on in attack over the past fortnight they've looked near unstoppable. If they can find space for the likes of Jessica Sergis and Tiana Penitani​ on Sunday, St George Illawarra will have too many points in them. Dragons by 4

The Dragons are kicking into top gear as they look to finish off their 2019 campaign with a premiership. All the girls are united to do it for Teuila Fotu-Moala after her three-game ban and Jessica Sergis will show everyone why she was a deserved Dally M Medal winner with her explosive efforts down the right edge. Dragons by 8

The Broncos have something about them and you just can’t shake it. It will be a close game, decided by conversions, and Chelsea Baker’s kicking game has been off this season so no doubt she’s out in the paddock working on them for Sunday as Maddie Studdon is ahead of her for conversions. Broncos by 4

Brisbane have shown this season that they know how to get the job done, with the only exception being their last game against the Warriors where they missed a match-levelling conversion and were denied a try in interesting circumstances. The Dragons have gotten better as the season went on, but the Broncos will hold steady. Broncos by 10 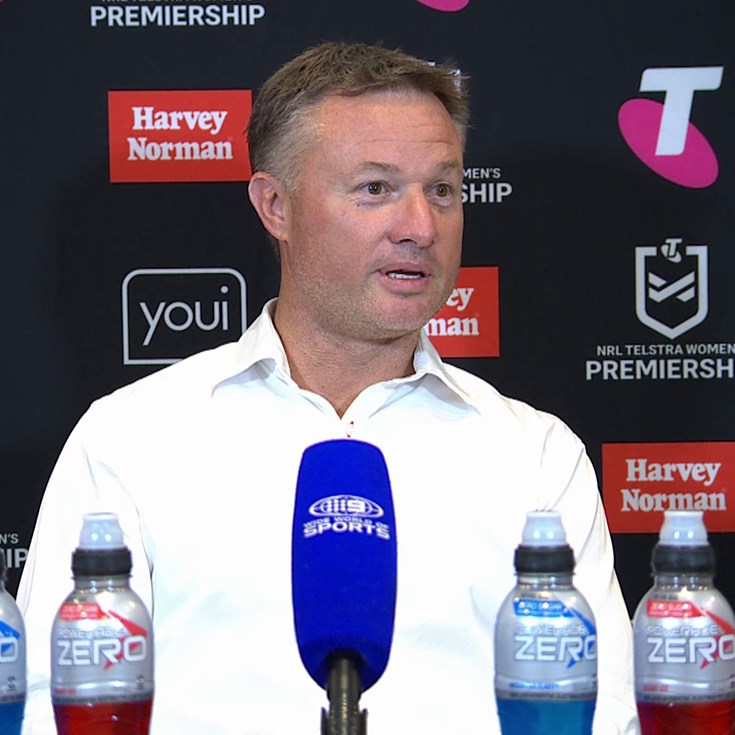