Gareth Widdop’s lasting impression on the NRL now comes with an historical exclamation mark after the classy five-eighth guided the Dragons to a 24-16 win over the Titans on the Gold Coast on Saturday night.

Like two fat seagulls scrapping for the last chip on Burleigh Hill, it was always going to come down to who wanted it just that little bit more as 15th played 16th in front of 11,274 fans at Cbus Super Stadium.

The Dragons – the lowest finish in joint fixture history unavoidable – and the Titans – consigned to the fewest wins for their club in a single season – battling for a shred of credibility to take with them into the off-season.

If the opening 40 minutes was a nervous grind from two teams who left any semblance of confidence back in June, the opening flurry to the second term gave an indication of how their 2019 seasons would ultimately end.

Titans half Tanah Boyd lost the ball as he dived across next to the posts five minutes in, Dragons fullback Corey Norman scored one of the more bizarre tries of the season from the very next set, and at every possible opportunity passes were swung from one side of the field and back again.

Retiring Titans fullback Michael Gordon came up with try-savers in consecutive tackles on Jonus Pearson and Josh Kerr on opposite sides of the field. Yet a ricochet of a Widdop kick sent the Titans on a surge downfield, ending one tackle later with Mitch Rein running 35 metres to score untouched and bring the score back to 12-10 to the Dragons 25 minutes from full-time.

But with so much space and so little care for defence it was the class of Widdop that shone through, becoming the first Englishman to score 1,000 points in the NRL with his conversion of Ben Hunt’s try in the 66th minute and then sealing the win by providing the final pass for Hunt’s second six minutes later.

He is off to the Super League next season.

Prior to the game most interest centred on departing veterans and emerging rookies, Titans fans getting their first good look at young half Boyd.

Displaying a crisp passing game that created space on the right edge for Kevin Proctor and Tyrone Peachey, his kicking game was found wanting early, a grubber into the Dragons defence and another kick sailing out on the full.

Widdop threatened the Titans right edge numerous times early, but it was the home side to strike the first blow - a Jarrod Wallace offload providing the opportunity for Jai Arrow to score his first try of the year in the 14th minute.

Searching for a response, Dragons prop Paul Vaughan was held up over the line and Widdop denied due to a challenge in the air by Pearson on opposite Jesse Arthars, St George Illawarra finally breaching the Titans line five minutes from half-time.

A Jai Whitbread error gave the Dragons a scrum on their own 30-metre line and with a shift to the left Tim Lafai attracted two defenders before sending Pearson on a 60-metre run to the try-line and a 6-6 scoreline at the break.

Hunt finishes the season with a double

Less than five minutes into the second half – on the back of an AJ Brimson and Phil Sami back-field surge – Boyd seemed certain to score until a late effort from Korbin Sims jolted the ball free as he dived over right of the posts.

Two tackles later, Norman had the Dragons second of the night.

Seven Titans players were left sprawled across the ground as Luciano Leilua offloaded just before going into touch. Euan Aitken then made use of the acres of space to push through two more Gold Coast tacklers and send Norman on a clear path towards the try-line.

The Titans turned defence into a long-range attack to draw within two 15 minutes into the second half through Rein. Then Dragons winger Tristan Sailor was denied a 90-metre intercept try a short time later due to Aitken’s protruding thumb touching the previous pass.

Hunt dived over 13 minutes from full-time which was most notable for providing Widdop the chance to surpass the 1,000 career point-mark in his final NRL appearance.

Titans winger Phil Sami added one to the highlight reel with a spectacular swan dive to score six minutes from full-time. 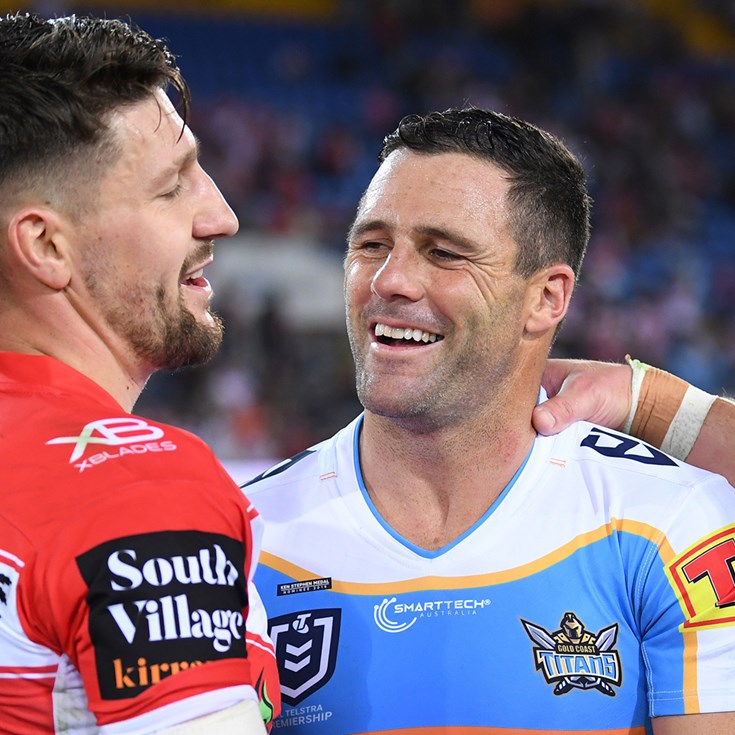 Hunt finishes the season with a double