The Sharks may have got caught up listening to last week's pre-game talk that they were highly favoured to beat Penrith.

The Panthers had other ideas, establishing a commanding 26-4 lead and doing enough to claim a 26-20 triumph after Cronulla's late revival.

It was the kind of loss that could prove costly for the Sharks when the dust settles after the final round.

The Dragons finally gave their win-starved fans something to celebrate last week and their final four games could have a significant impact on coach Paul McGregor's future with the club.

Sharks: The Sharks are 1-17. Matt Moylan (concussion) is back on deck so Josh Dugan reverts to the centres and Josh Morris moves to the wing. Andrew Fifita is out with a knee injury and his place is taken by Billy Magoulias. Blayke Brailey and Ronaldo Mulitalo were trimmed from the squad on Saturday while Jayson Bukuya and Kyle Flanagan were omitted on game day.

Dragons: Zac Lomax has been called into the starting side on the wing, with rookie Jason Saab dropped in the only change from the squad announced on Tuesday. Luciano Leilua gets the nod to start for injured Tariq Sims, who is out for the rest of the season after undergoing groin surgery. Blake Lawrie comes onto the bench in the only other change to the team that beat the Titans last week. Reece Robson was omitted 24 hours before kick-off along with Saab. Tristan Sailor and Josh Kerr were omitted on game day.

The forwards should cancel each other out for the most part, which should ensure the spotlight falls on the battle of the halves. Cronulla duo Shaun Johnson and Chad Townsend weren't at their best last week and they have a tough challenge against Dragons pair Ben Hunt and Gareth Widdop.

More starch in defence and more spark in attack. They had it in patches in last week's loss to the Panthers and need to deliver for 80 minutes as they did in round 20 against the Rabbitohs. It's a local derby so the Sharks should know what to expect from their long-time rivals.

Last week's win over the Titans should make for a better mood at training this week and they can take a nothing to lose, everything to gain approach. The Dragons would love to put a big dent in the Sharks' finals hopes and they're capable of an upset if stars like Hunt, Widdop, Corey Norman, Tyson Frizell and Cameron McInnes all play to their potential on the same day.

The Dragons won last week, but they also leaked a lot of points against an ordinary Titans side. They will need to be better. This is big brother against little brother – form can go out the window in matches like this. Cronulla were pretty poor last week with energy and execution. This is a must-win game for the Sharks. Matt Moylan’s return will really help Cronulla with their creativity. Sharks by 2

Sharks halfback Chad Townsend is always sniffing around in support on the field, so much so that he leads the NRL in support play (325). On the negative side Sharks utility back Josh Dugan has committed a league-high 34 errors.

The Dragons played 10 games before going down 22-9 to the Sharks in round 11. They've played nine games since that Sunday afternoon in Wollongong and coach Paul McGregor will be curious to see what his team has learned. The Dragons led 9-8 at half-time in that match but were scoreless in the second half. Teenage centre Bronson Xerri starred with a hat-trick of tries for the visitors. 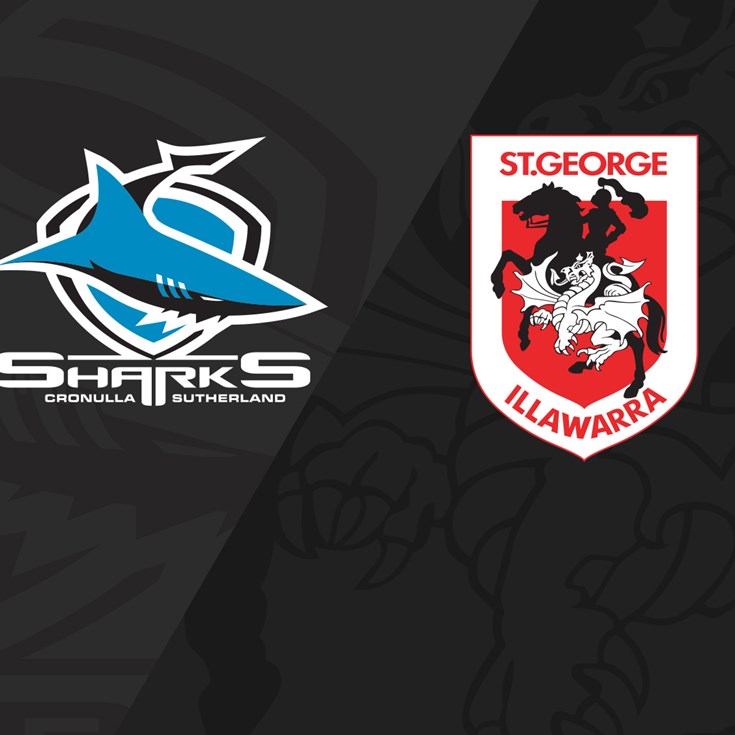 Dragons fall in the final minutes to Cronulla