Maddie Studdon proved she is still one of the game's most influential playmakers by leading NSW to a 14-4 win over Queensland before a crowd of 10,515 in the Women’s State of Origin at North Sydney Oval.

A year after being forced to quit her job to captain the Blues in the inaugural Women’s Origin, Studdon went into the match with a point to prove after being shunted from the Sydney Roosters side for last season’s NRLW grand final and losing her spot in the Jillaroos squad.

Just days after signing with St George Illawarra, Studdon showcased her skills to steer the Blues to a three-tries-to-one win with a superb second-half performance in which she scored a try and laid on another for new NRLW team-mate Shakaih Tungai.

Studdon capped a memorable night by taking home the Nellie Doherty Medal for player of the match.

"I couldn’t be more happier for someone after all the criticism she copped late last year," NSW coach Andy Patmore said. “She has copped a fair bit of flack and we had good conversations about that, about her keeping her confidence and simplifying her game.

“Tonight she ran the ball a lot more. She is a good leader too, she controls that side of the field."

Interchange prop Chelsea Lenarduzzi (113 metres) was the only Maroons forward to run more than 100 metres with the ball, while hooker Brittany Breayley ran 72 metres from dummy half and made 44 tackles.

Queensland led 4-0 at halftime after second-rower Tazmin Gray scored the only try of a fast and furious first term in the 25th minute.

Both teams completed all but two of their sets but a 5-1 penalty county and some poor last-tackle options by NSW enabled the Maroons to dominate field position  and coach Jason Hetherington would have been disappointed not to have a bigger lead at the 30th minute interval.

A 40:30 kick by halfback Jenni-Sue Hoepper gave Queensland the ascendency in the 11th minute and only a desperate tackle by Hannah Southwell prevented veteran prop Heather Ballinger from scoring in the next set of tackles.

Maroons five-eighth and captain Ali Brigginshaw forced a repeat set with a perfectly weighted grubber into the NSW in-goal and a ruck penalty against prop Simaima Taufa piled more pressure on the Blues.

However, Queensland were unable to capitalise after a pass from Brigginshaw to prop Tallisha Harden was ruled forward as she crashed over the tryline.

Breayley threw a scare into the Maroons camp when she suffered a leg injury but the 2018 Dally M medallist recovered quickly to earn a play-the-ball penalty as she raced out of dummy half and another infringement by Southwell put Queensland in a good attacking position.

Eventually the weight of possession took its toll on the NSW defence, and Gray scored five minutes before halftime when she dummied and stepped inside centre Isabelle Kelly to cross for the first try of the game.

The Blues best scoring opportunity of the first half was an in-field grubber from winger Shakiah Tungai in the final minute that Queensland second-rower Annette Brander had to scramble to clean up and carry over the dead ball line.

Studdon slices through for the Blues

However, it was a different story in the second half as the Blues took control and piled on three unanswered tries to ensure they retained the Women’s State of Origin Shield.

The first signs of how the game would turn after half-time came after Tungai swooped on a Studdon grubber in the 35th minute only for referee Grant Atkins to rule that she had bounced the ball attempting to ground it.

Fellow winger Jessica Sergis levelled the scores at 4-all in the 39th minute after a long pass from Kirra Dibb created space for her out wide and a 40:30 kick by the NSW five-eighth put her side within striking distance again.

Dibb floats a pass over to Sergis

Tungai scored in the 44th minute after Studdon feigned to kick and linked with Kelly who put the winger over in the corner and the Blues halfback then ensured the win when she dummied and stepped her way over the try line six minutes later.

After Queensland dominated the interstate clashes for more than a decade the Blues have now won four years straight and have unearthed plenty of rising stars in the process.

Patmore said there had been discussions in camp about whether the Women's Origin should become a three-match series and the length of games extended to 70 or 80 minutes.

He believes the women's game should consolidate on its success and build slowly.

“The game is growing quickly and the quality that is coming into the game is just growing all the time," he said.

“That increase in quality comes from the quantity of girls, and the quality of girls here tonight who play rugby league, and the more they play the better they will get and the better this game is going to get."

The crowd of 10,515 exceeded the 6,824 fans who attended last season as well as the NRL's expectations and they created an electric atmosphere, particularly as the Blues stormed home in the second half.

“It's an amazing thing the support the game is getting," Patmore said. "I think it is great and the atmosphere there, and the chants, it was a great crowd and a great venue." 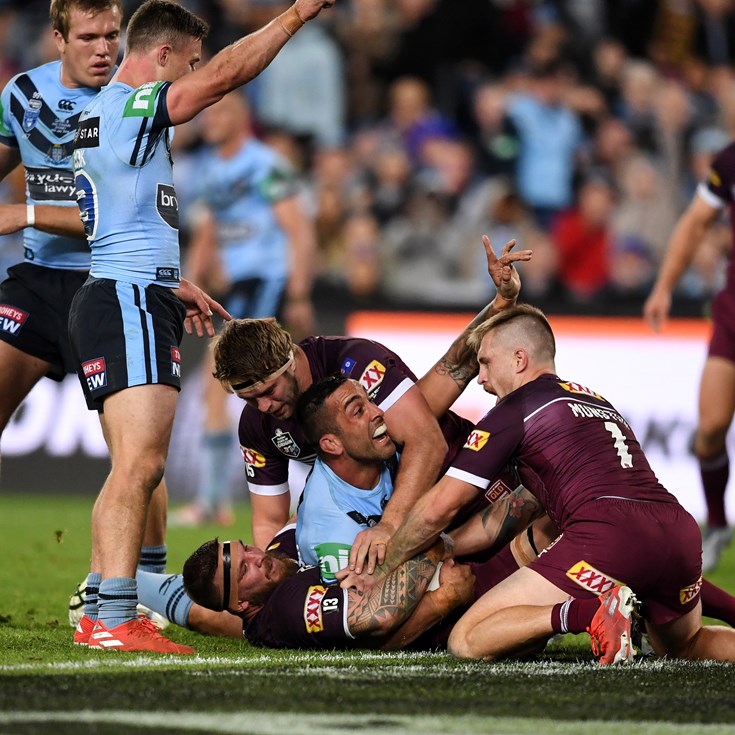