A few days after Blues coach Brad Fittler named him as a contender, Newcastle halfback Mitchell Pearce may have put himself in the frame for an unlikely Origin recall after combining with fullback Kalyn Ponga to inspire a stunning 45-12 humbling of St George Illawarra in Mudgee on Sunday.

Pearce scored a try, helped create another four for team-mates and kicked a 35 metre field goal as the Knights ran riot against an out-of-sorts Dragons team to give Blues coach Brad Fittler a timely reminder of his ability.

With Penrith’s Nathan Cleary struggling for form, Fittler on Thursday mentioned Pearce and South Sydney’s Adam Reynolds as possible alternatives and the Newcastle captain could do little more to push his claims.

Fittler has also expressed concern about Ponga’s impact on the Queensland team and he was in devastating form as the Knights recorded their fourth consecutive win to finish with a personal haul of 26 points from two tries and eight goals.

The loss was St George Illawarra's fourth in as many matches and there were early signs of how the game would unfold when prop Tim Glasby pounced on a Pearce grubber kick to score Newcastle's first try in just the fifth minute.

The star fullback then wowed the 9267 fans at Glen Willows Stadium when he left likely Queensland team-mate Ben Hunt diving at the ground from marker and beat three other defenders before breaking free of an attempted Matt Dufty tackle to score his first try.

It could have been even worse for the Dragons as Newcastle winger Edrick Lee was disallowed a try in the 18th minute after replays showed that hooker Danny Levi had knocked the ball forward in a mid-air challenge with Dufty from a Pearce bomb.

St George Illawarra did not get to play the ball in the Knights end of the field until the 19th minute but they turned it over almost immediately after an attempted offload by centre Tim Lafai went to ground.

In contrast, Newcastle only committed their first error in the 30th minute when Hymel Hunt lost the ball and the glut of possession led to another Ponga try and a penalty goal.

Ponga's second try was almost as good as his first, with Pearce running to the line and creating space for the fullback to beat Frizell and Dufty and score.

The Dragons were their own worst enemy, with Zac Lomax's restart from Ponga's first try going dead, while five-eighth Jai Field and Hunt each gifted Newcastle seven-tackle sets from misjudged kicks.

At the other end, Ponga forced another goal-line drop out by tackling Dufty in-goal after leading the chase from his own kick and Pearce put Mann over in the 36th minute in the next set of tackles.

Only a try-saving tackle by Hunt on Knights second-rower Lachlan Fitzgibbon in the 39th minute prevented Newcastle from going to the halftime break with a bigger lead than 28-0 but it only took five minutes into the second term for Newcastle to add more points.

Winger Shaun Kenny-Dowell scored off a cut-out pass by Pearce and the Knights captain then got a try of his own in the 54th minute through sheer will after beating Lomax in the race for a perfectly weighted Lee kick.

Trailing 38-0, the Dragons finally gained some reprieve when Mann was sent to the sin bin for repeated infringements by Newcastle players and Tariq Sims and Lomax scored during the 10 minutes he was off the field.

However, normal service was resumed when the Knights got back to 13 on 13 and Connor Watson scored another try before Pearce slotted a 35 metre field goal in the 79th minute. 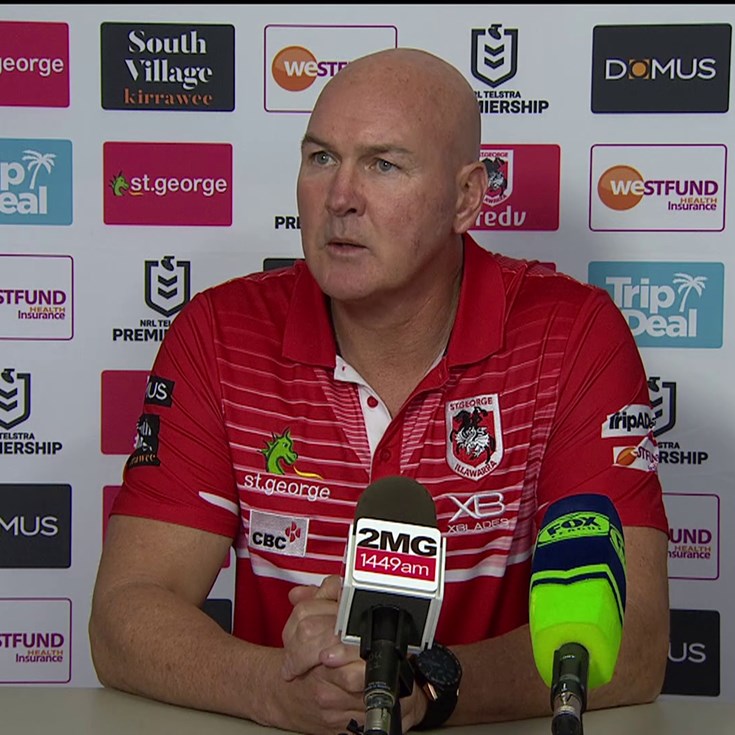