Sam Burgess may have his kicking licence revoked but South Sydney coach Wayne Bennett is likely to give him free rein to do anything else after the English forward sparked a second-half revival to down St George Illawarra at Netstrata Jubilee Stadium.

Burgess scored two tries and laid on another one for five-eighth Cody Walker to lead Souths to a 34-18 win after a lacklustre first half in which the Dragons were the ones with more enthusiasm and energy.

An attempted kick in which he failed to make contact with the ball was Burgess' only notable blemish in a man-of-the-match performance that prompted commentators and coach Wayne Bennett to declare him the game's greatest forwards.

Remarkably, Burgess sits atop the NRL's leading try scorer ladder with three in two matches and only left centre Braidon Burns (175 metres) carried the ball further than his 163m against the Dragons.

Burgess' feats were even more important given that captain and right centre Greg Inglis was hampered by a right shoulder injury and the Rabbitohs lost former skipper John Sutton in the first half due to a chest problem.

The Dragons showed their intent in the opening minutes when Tariq Sims burst through the defence and looked set to score but he lost the ball reaching out to plant it on the try line.

Instead it was the Rabbitohs who went out to an early lead after NSW Origin hooker Damien Cook raced out of dummy half and sent Cameron Murray racing past rookie Dragons lock Blake Lawrie and into open space before dummying his way around fullback Gareth Widdop to score.

However, the Dragons were the more dominant team in the first half leading 12-6 at the break.

Jordan Pereira helped level the scores in the ninth minute after Widdop stepped across the face of the Souths defensive line before finding centre Tim Lafai, who put his winger over with a clever flick pass.

Widdop converted from the sideline and St George Illawarra continued to mount pressure on the Rabbitohs through the involvement of Widdop as a third playmaker and offloading by their forwards in the middle.

Dragons prop James Graham had passed the ball five times in the first 20 minutes as the home team used quick play-the-balls and exchanges of passing among their forwards to gain easy metres in the middle.

Eventually the weight of possession in good field position paid off when five-eighth Corey Norman threw a 20-metre cut out pass for an unmarked Pereira to grab his second try in the 20th minute.

A penalty against interchange prop Liam Knight for an apparent chicken wing on James Graham enabled Widdop to extend St George Illawarra’s lead to 12-6 in the 28th minute. Perhaps even worse for Souths fans in the 10,080 crowd at that particular point in time was the sight of Sutton heading for the dressing room.

Bennett had used all four of his bench players by this stage, compared to just one by Paul McGregor in an indication of the toll that the expansive Dragons attacking game was taking on their bigger opponents.

If it looked like the break couldn't come quick enough for Souths, the way they started the second half confirmed it as they returned a rejuvenated side and quickly gained the lead and control of the match.

Burgess helped level the scores at 12-12 in the 44th minute when he burst through the defence to score and he then laid on a try for Walker four minutes later as the Rabbitohs shifted up a gear.

Pereira had the chance to grabbed his third try in the 52nd minute but he was unable to take a Lafai pass and Souths scored again on the ensuing set of tackles through centre Braidon Burns.

The Rabbitohs continued to target St George Illawarra’s right edge and were again rewarded when Campbell Graham scored in the 62nd minute after fullback Alex Johnston swivelled out of the tackle of Fijian winger Mikaele Ravalawa, although Cook's pass to Walker looked forward.

Burgess sealed the win when he crashed over in the 70th minute to score his second try of the match before Lafai grabbed a consolation try four minutes later for the home side. 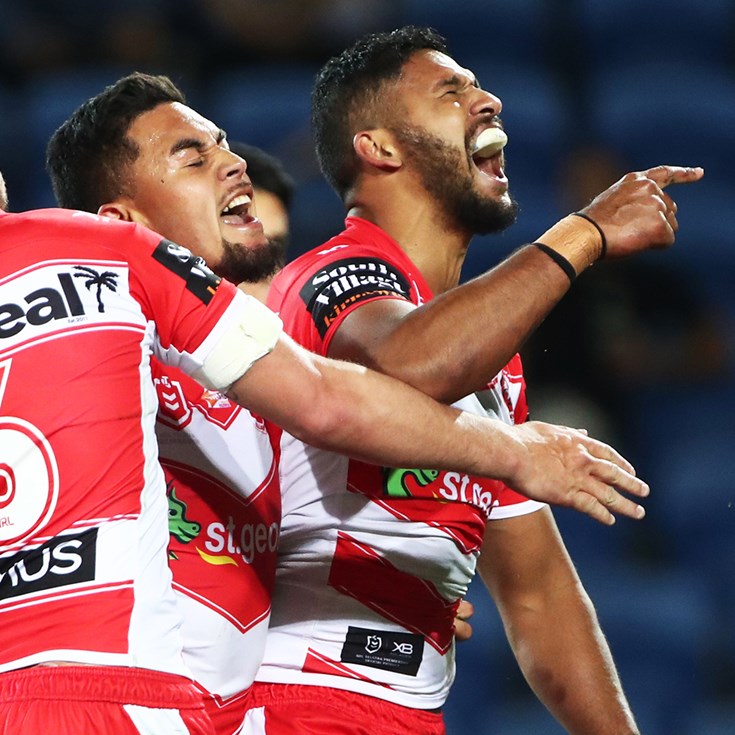