She was one of the first Australian-based players to ever pull on the Kiwi Ferns jersey but the pathway for Raecene McGregor was all based on risk and reward.

Born in Sydney, McGregor became eligible for the Kiwi Ferns through her parents, who hailed from New Zealand.

The door for Australian-based players to represent the Kiwi Ferns only opened ahead of the 2017 Rugby League World Cup.

After representing Australia in rugby sevens and soccer, playing for her parent's country was the furthest thing from her mind.

"There was a Kiwi selector for one of my club games at Belmore," McGregor told NRL.com.

"He said to me that New Zealand were opening up the chance for Australian players with Kiwi heritage to represent the Ferns.

"I didn't really take notice, had never thought about it. I've always played for Australia and NSW in sport. About three months later I got a call to say there was a get-together in Australia for a squad to train."

McGregor joined the training sessions, mainly to keep up her fitness, until four players were picked to trial for the Kiwi Ferns World Cup squad in 2017.

"I wasn't one of them," McGregor said.

"But they said if I paid for my way over to New Zealand and played well enough for them to take me on they would reimburse me.

"So I took myself over there, paid for the accommodation and played my first game."

The deal from the trials were simple: perform and you'll be rewarded. But fail and the trip would prove more of a holiday.

The worse-case scenario occurred for the 20-year-old, with McGregor stretchered off the paddock after a rival player landed awkwardly on her neck.

She spent the night in hospital and was convinced her dream international career with the Kiwi Ferns may have been over before it really began.

"It happened in the last 20 minutes of the game and I thought they'd think 'she's too soft'," McGregor laughed.

"But they paid for my flight back and the next day called to say I played really well from what they saw and would love to have me come back for a second trial.

"They reimbursed everything, I wasn't expecting that at all."

The rest from there, as she says, is history.

McGregor made her Kiwi Ferns debut at the 2017 Rugby League World Cup, before cementing her spot in St George Illawarra's halves in the inaugural NRLW season.

And her trips ever since have all been paid for.

"The experience was so great, the girls welcomed me into that team," McGregor said.

"They are the best people I have ever met. I will never look back, even if I was asked to go into a Jillaroos camp, now that I've played with them I could never turn my back on those Kiwi Ferns girls." 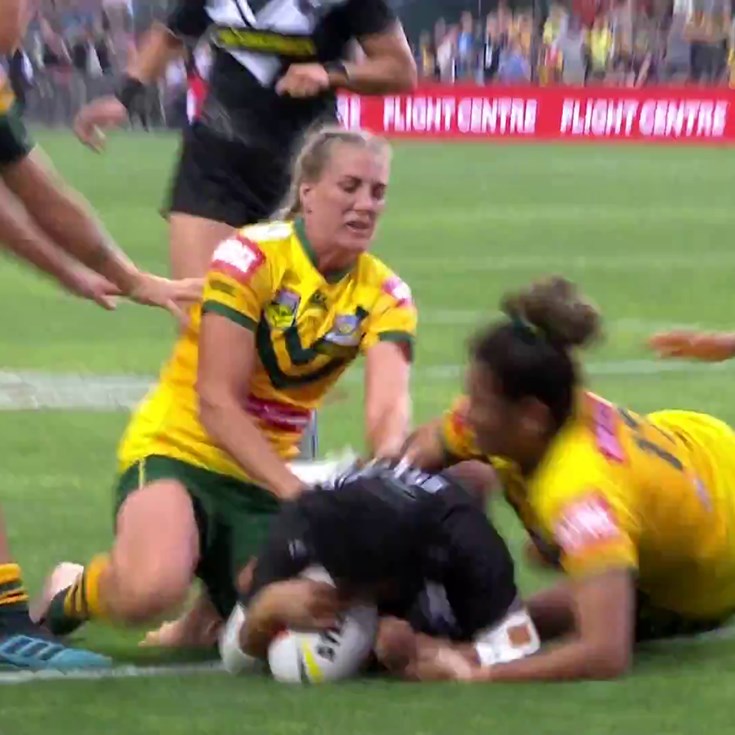 Feterika forces her way over