A rejuvenated Dragons outfit has earned a morale-boosting win and all but ended Wests Tigers' committed late-season finals push in front of a packed Leichhardt Oval crowd on Saturday.

With the Wayne Pearce Hill bathed in a sea of black and orange, the Dragons forward pack – led by youngster Luciano Leilua – put in their best effort as a pack since the Origin series started to silence the parochial home crowd.

Leilua was a monster on the left edge and scored the match's crucial try while Tariq Sims hit like a missile, Tyson Frizell was a perpetual motion machine and Jack De Belin showed the type of effort that originally made him the starting No.13 for Brad Fittler's Blues this year.

Struggling halfback Ben Hunt had another shocker but the fill-in at five-eighth for injured captain Gareth Widdop, utility Kurt Mann, had one of the best games of his career.

The Tigers remain a mathematical chance of a miracle finals finish but now require two straight wins and other results to go their way.

They will be left to rue a heap of missed opportunities in the first half and a mass of poorly executed plays with everything to play for.

They earned the first of a heap of gilt-edged attacking chances when Matt Dufty dropped a nightmare of a swirling bomb in the sith minute but couldn't make it count.

A Dragons team that this week vowed to reverse their problematic glut of early penalties from last week's loss to the Eels committed the same errors, handing the Tigers a 6-0 early advantage in the penalty count largely through offside calls and ruck infringements.

With a mountain of first-half attacking ball, the Tigers were on four separate occasions guilty of dropping it at the Dragons line when a lead runner crashed onto a short ball and failed to hold on.

When Farah's 26th-minute grubber caught his own teammates unawares and rolled over the dead ball line the Dragons went the length through a move started by Leilua to open the scoring through Jordan Pereira.

From their next possession they earned their first penalty of the game, kicking off a run of four straight. It helped them camp on the Tigers line and apply pressure but a curious decision to go for two points resulted in Tim Lafai hitting the post and the Tigers regaining possession as the 6-0 score-line held firm through to half time.

The second stanza started disastrously for the visitors as an out of form Ben Hunt dropped the kick off in a carbon copy of his error for Brisbane in extra time of their 2015 grand final loss and the Tigers immediately made them pay as Chris Lawrence crashed over.

Another run of penalties against the Dragons resulted in an official warning and when Ben Hunt was pinged for offside moments later he was sent to the sin bin and Esan Marsters took the easy two on offer to level up at 6-6 after 54 minutes.

Another penalty goal edged the Dragons back in front and soaked up some of the sin-bin clock.

The Tigers gave up possession when Luke Garner tried to play the ball too quickly after being hit by a monster Tariq Sims hit before a tight but correct knock on call against Robbie Farah trying to clean up a loose Nene Macdonald pass at his own line heaped the pressure on the home team.

Leilua monstered his way over the top of the Tigers right edge defence to score a critical try moments later with Lafai putting the Dragons out beyond a converted try at 14-6 with 15 to play.

With the clock now their enemy the Tigers only got more frantic and instead it was Frizell who barged over to plant the ball down in the 75th minute to ice the crucial win. Kevin Naiqama's 79th-minute four-pointer closed the final margin to 20-12.

News & Notes: Jack De Belin played his 150th career game ... the Dragons had a player sin-binned for the third straight week when Ben Hunt was sent in the 53rd minute ... Wests Tigers host Manly at Campbelltown next Thursday while Dragons play the Bulldogs at Jubilee Oval ... Crowd: 18,387. 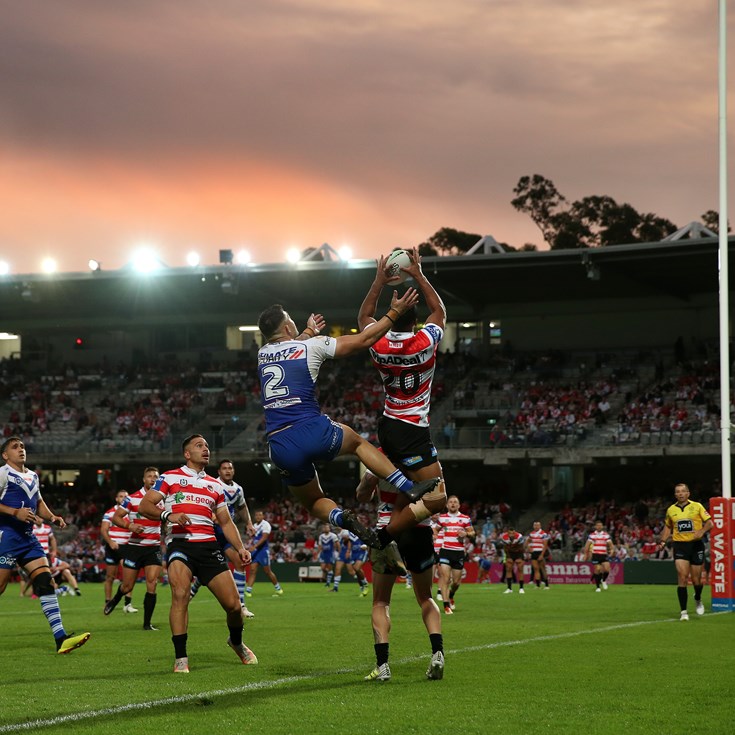