Both these sides are coming off losses but it's fair to say the stuttering Tigers have greater cause for concern than the second-placed Dragons.

After winning seven of their first 12 games, including a pair of victories over the highly fancied Melbourne Storm, Ivan Cleary's men have hit the wall big time. They've now lost four on the trot to the Titans, Raiders, Sharks and Roosters, all but ending their hopes of playing finals.

The return of favourite son Robbie Farah and the acquisition of Moses Mbye was meant to deliver a morale-boosting win in front of the Leichhardt faithful in round 16. The reality was a disastrous 30-12 loss and another blow to a side which had created so many good headlines in the opening two months of the season.

The Dragons managed to score 30 points in Melbourne with their Origin stars missing and could take plenty of positives from a game which got away from them late as Cam Smith took charge.

Key match-up: Robbie Farah will be better for the run at Leichhardt and he'll be able to focus solely on footy when he heads to Jubilee. His battle with Dragons rake Cameron McInnes should be an absolute beauty. Both are dangerous out of dummy half and both will get through a power of work in defence.

For the Dragons to win: They may have been undermanned at AAMI Park but there's no hiding the fact they leaked 52 points. That's more than the combined total they conceded in their previous matches against the Eels, Sea Eaglesand Bulldogs. If the Red V tighten the ruck and muscle up they can force the Tigers into error and squeeze the life out of them.

For the Tigers to win: Get back to what was working for them before this four-match losing run began. Stop trying to score off every play and come up with the miracle plays. The Tigers need Luke Brooks and Farah to control the tempo, kick deep and crank up the defensive heat on a Dragons side which could feel the pinch late with so many backing up from Origin.

Dragons Stat Attack: The Red V are yet to lose a home game in 2018. Whether in Wollongong or Kogarah, Paul McGregor's men have defended their turf with pride and passion.

Tigers Stat Attack: The Tigers haven't played finals footy since 2011. Their best finish in that time was ninth in 2016 but the heady days of 2010-11 seem a distant memory now. If they're to have any hope of making up the six-point gap between themselves and the eighth-placed Warriors they need to beat the top two sides (Dragons and Rabbitohs) in the next two games.

And another thing: Back in 2010-11, when the Wests Tigers were a finals force to be reckoned with, these two side played a couple of epic matches in September. In 2010, the Red V squeaked past the Tigers 13-12 in the preliminary final before going on to win the title. A year later the Tigers got a measure of revenge with a 21-12 win in a qualifying final before being knocked out by the Warriors in an epic semi-final.

The Dragons are 1-17. Ben Hunt, Paul Vaughan, Tyson Frizell, Tariq Sims and Jack De Belin return from Origin. Leeson Ah Mau and Luciano Leilua drop to the bench and Jacob Host (shoulder) is out. Jason Nightingale is back starting on the wing with Kurt Mann on the bench. Patrick Herbert, Hame Sele, and Jai Field drop off the extended bench after Blake Lawrie, Reece Robson and Darren Nicholls were cut from the reserves on Saturday.

Alex Twal is a late withdrawal, with Luke Garner getting a spot on the bench. Benji Marshall returns at five-eighth in place of the injured Josh Reynolds (shoulder). David Nofoaluma (calf) returns on the wing in place of Malakai Watene-Zelezniak. Ben Matulino returns at prop with Josh Aloiai moving into the starting second row and Chris McQueen out. Watene-Zelezniak, Jacob Liddle and Tim Grant all dropped out of the initial 21-man squad named on Tuesday.

Petero Civoniceva's prediction: The Dragons will be keen to bounce back after the heavy Melbourne defeat, and in front of their loyal fans at Kogarah should be too hard to stop. The Tigers may provide some resistance, but I can't see them maintaining it for 80 minutes. Tip: Dragons by 8 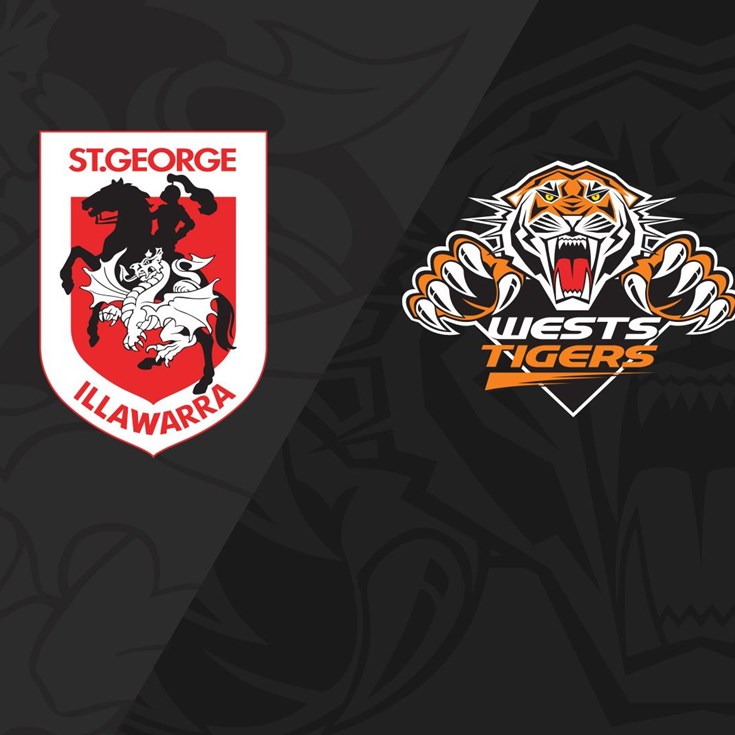 Dragons fall to the Wests Tigers