Blues lock Jack De Belin has spent years telling anyone who asked that he felt his game would be suited to State of Origin.

In 2018 he no longer had to talk the talk, he got a chance to walk the walk and the results are in: he was spot on.

Former Blues coach Laurie Daley was never quite swayed, with the Dragons No.13 in the extended NSW squad for all three games last year.

Under new mentor Brad Fittler and his positive philosophy of picking good characters purely from players in good form saw De Belin swept into his starting side on debut, where he played strongly in a 22-12 game one win despite coming in under an injury cloud with a hip pointer issue.

In three separate spells he racked up 35 tackles in 59 minutes – only Damien Cook (40) made more for the Blues.

Almost every tackle was granite shoulders driving up under the ball and into rib cages, tossing players on to their backs, or chopping out legs to stop runners in their tracks.

In just the third minute, De Belin raced up on clubmate Ben Hunt on the halfback's first kick of the night, smothering him into the turf, letting him know he was in for a long night.

In the 47th minute Hunt copped it again as De Belin speared a shoulder in under the ball, lifted, and slammed his good mate back-first into the pitch, popping the ball free inside the Queensland red zone.

Moments later Latrell Mitchell took the team's score to 18, a tally which would prove insurmountable for the Maroons.

Sitting down with NRL.com in the Blues sheds after the series-clinching 18-14 win, a beer-soaked De Belin couldn't wipe the smile off his face.

"Mate I'm over the moon, it's such an unreal moment, I'm so privileged to be able to win a series with the bunch of boys that are here," De Belin said.

"I feel like I didn't let anyone down tonight (Sunday). But at the end of the day it wasn't me, it was the team that got across the line."

The 2011 under-20s Dally M Player of the Year said there had been times when he questioned whether his senior representative career wasn't meant to be, whether his time – which he firmly believed would come – would ever actually arrive.

"My club form was good. I've always said I wanted to play Origin, all I needed was that opportunity and I finally got it this year and I couldn't be more thankful to Freddy and the coaching staff for believing in me.

"It was only a matter of time - I knew I was ready for Origin but at the end of the day it comes down to your club form. A big thanks to the Dragons players as well, if it wasn't for them I wouldn't be here."

De Belin also revealed he copped yet another knock to his painful and ongoing hip pointer injury – suffered back in round nine – in his opening 20-minute stint.

"I remember taking a pretty bad knock and I just knew it didn't matter how bad the hip was, I was still going to push through and play," he said.

"It's still haunting me to this day but it didn't matter how bad it was, I was always going to keep playing. The needle works wonders!"

De Belin was recalled to the action in a frantic final stanza with the Blues down to 12 men with James Roberts in the sin-bin.

A concussion to captain Boyd Cordner saw De Belin finish the contest. While he felt for the skipper to have to go off for the final minutes, he relished the chance to be on the field when the final siren went.

"I just looked around at the boys (in the last 10 minutes) and I knew (we'd win). I was looking in their eyes, the determination, there was no way we were losing. It was our time," he said.

"It didn't matter how well Queensland were playing, they weren't taking it from us. It's all about winning those big moments and when it mattered all the boys turned up."

A 12-month break between Australia's last Test – the 2017 World Cup final – and it's next at the end of 2018, combined with plenty of representative retirements will result in a new-look green and gold next time Mal Meninga names his squad.

De Belin is hoping he can ride his Origin form through the second half of the season with the Dragons and stake a claim for a spot.

"Yeah for sure (it's a goal), as I've always said I feel like my game translates to representative football," he said.

"I may not be the flashiest player but at the end of the day I'm definitely going to do what's required of me and get the job done.

"I feel like it's my time now. You never know which way they're going to go. I just need to finish off a good series for the Blues and play good club footy and the rest will take care of itself." 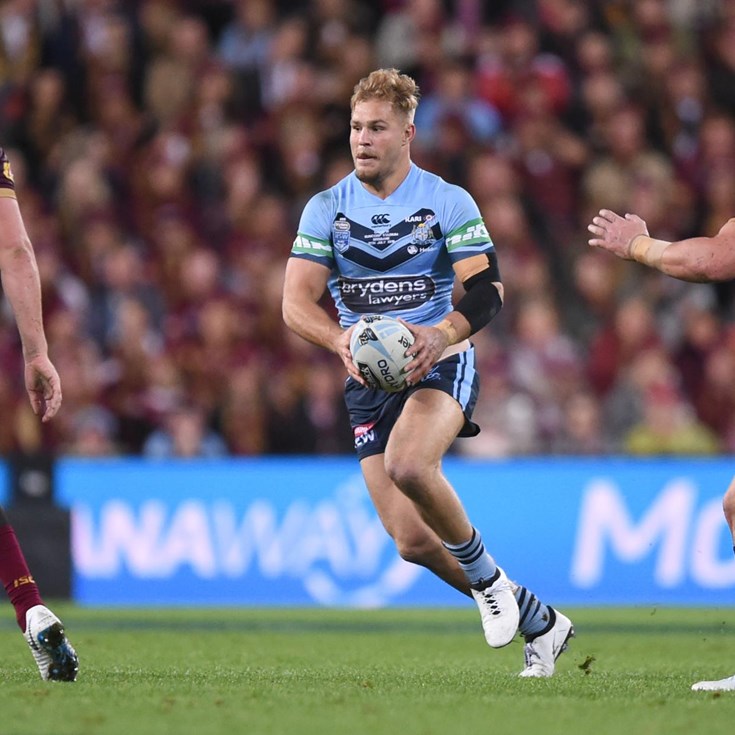 'Bring out the broom': Blues aim for Origin sweep