St George Illawarra fullback Matt Dufty gave his opposite Matt Moylan a horror night, scoring a double with speed and a neat step, as the Dragons made it six from six with a 40-20 win over an injury-ravaged Sharks outfit at WIN Stadium on Friday night.

The joint venture club had beaten the Sharks 20-16 four weeks ago but Black Friday’s scoreline was worse. The news continued to deteriorate for Shane Flanagan’s men with both Paul Gallen (knee) and Andrew Fifita (knee) unable to return for the second half after being injured in the 13th and 34th minutes respectively. Then Wade Graham (hamstring) went off in the 48th to deny Cronulla the power of three starting forwards.

Being reduced to 14 men didn’t kill off the Sharks completely. Down 28-10, Valentine Holmes scored off fine lead-up work by former Dragon Josh Dugan, then Ricky Leutele darted through a gap after a Trent Hodkinson cut-out pass to haul the 2016 premiers back to 28-20 with 22 minutes to play.

Repeated replays showed a finger-tip knock-on by Holmes to deny the Sharks third try in the space of eight minutes. It would have made matters extremely interesting but then Jack de Belin scored in the 64th minute to push the Dragons back out beyond reach.

Regardless of the trail of Cronulla injuries, Paul McGregor’s kept their focus and did not let their standards drop. It was a six tries to four show at WIN Stadium and now every player in the Dragons' starting 13 – with the exception of James Graham – has scored at least one try after just six rounds.

Widdop’s eight goals on Friday brought up his 800th career point in the NRL.

The Dragons took a 16-10 lead to the dressing rooms after a highly entertaining first half, despite the 16 penalties blown.

Referee Ashley Klein sent Dragons hooker Cameron McInnes to the sin bin in the 14th minute, but it didn’t stop players from standing off-side, or not releasing the tackled player. Sharks prop Matt Prior was also placed on report for a high tackle on Graham.

Both sides scored two tries in the opening 40 minutes - Jayden Brailey and Edrick Lee for the Sharks and Matt Dufty and McInnes for the Dragons. McInnes’ was a sensational 40-metre effort when he just accelerated past limp defence to score in the corner.

The Sharks had shaken up their backline keeping Moylan at fullback, even though Dugan was returning from two weeks out with a groin strain.

Dugan returned to right centre and received a few boos early from the Wollongong faithful but he was instrumental in the Sharks mounting a comeback.

WIN Stadium has become a lucky charm for the Dragon when it comes to the local derby. The Sharks have now lost 12 of their past 13 games there.

The Dragons now head to Mt Smart Stadium next Friday night to face the Warriors, another team riding a wave of success.

Back-to-back losses has seen the Sharks slip to 2-4 for the season ahead of a round seven clash with Penrith at Southern Cross Stadium. 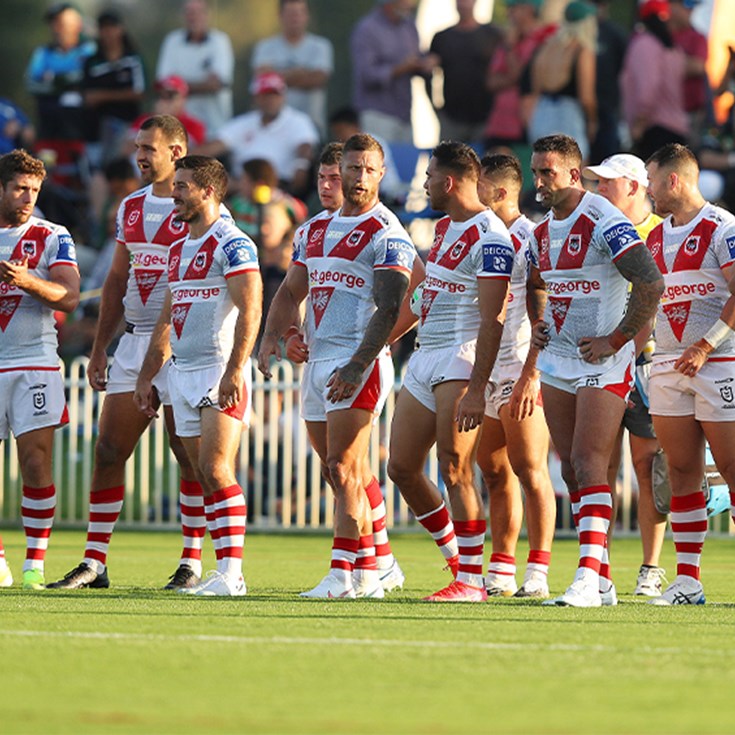