Mounties have recorded a thrilling victory in Round 1 of the Intrust Super Premiership NSW competition, beating St George Illawarra 22-20 in hot and humid conditions at WIN Stadium in Wollongong.

The Dragons raced to a 14-point lead in the first half but ultimately it was the class of Mounties’ outside backs and the clever play of hooker Craig Garvey that saw them finish on top in a game that went down to the wire.

The Dragons thought they’d pulled the match out of the fire in the dying stages with a 70-metre, hail-mary downfield kick from a scrum that ended with Zac Lomax completing a one-on-one steal on Mounties' line and appearing to crash over to score and steal victory, but the centre was ruled offside.

The first half was, indeed, a tale of two halves – the home side racing to a 14-point lead before the visitors came storming back.

The Dragons got off to the perfect start, crossing the line after just a few minutes minutes through a simple right-to-left shift that saw influential fullback Jai Field cross the line.

The Dragons continued the momentum and just a handful of minutes later worked the same patch of grass, once again crossing in the north-western corner of the ground. Another slick backline movement ended in a Patrick Herbert try after Adam Clune feigned to head out the back, instead delivering a flat pass to the centre to crash over.

Clune again used Field as a decoy in the 20th minute, with another face ball on the Mounties line seeing Jackson Ford crash over. Field’s conversion from in front stretched the Dragons’ lead to 14.

Mounties, however, eventually emerged after a slow start and returned serve in the 23rd minute. Some smart play by Cooper Bambling and Tyler Cornish saw Michael Oldfield crash over. Sitiveni Moceidreke’s laser-like conversion took the score to 14-6.

Mounties continued to work their way into the contest, scoring another close-range try when creative No.9 Garvey told a lie by faking left before the shortest of passes right saw Sam Duggan crash over. Moceidreke sent the score to 14-12 at the break.

The Dragons started the second half in fine and perhaps fortuitous fashion, the beneficiaries of a rebound that found its way into the Mounties in-goal area. Attacking the visitors’ line, the Dragons through Field flung the ball to the right, with the attempted tackle from Mounties sending the ball into the in-goal area for Jack Payne to bring the score to 20-12.

Mounties, however, once again came bouncing back – surging downfield with it looked like the game would fall for the home side. Some slick work and quick hands eventually found the hands of new recruit Ed Murphy, with the 2017 Intrust Super Premiership NSW Team of the Year member doing enough from close range after to keep the defence at bay and cut the lead to just four.

Mounties ultimately secured victory on the back of some outstanding play from winger Mikaele Ravalawa, who breezed past the Dragons’ defence on a kick-return and raced downfield, with a sublime Oldfield flick pass a few players later setting up the match-tying try. Moceidreke’s sideline conversion handed Mounties their victory and coach Ryan Carr victory in his first match in charge of the club at Intrust Super Premiership NSW level.

Next week the Dragons face the Jets on Thursday night at Southern Cross Group Stadium, while Mounties host Wyong on Saturday at Aubrey Keech Reserve.

FULL-TIME@MountiesRLFC hold on in a tight finish to beat the @NRL_Dragons! 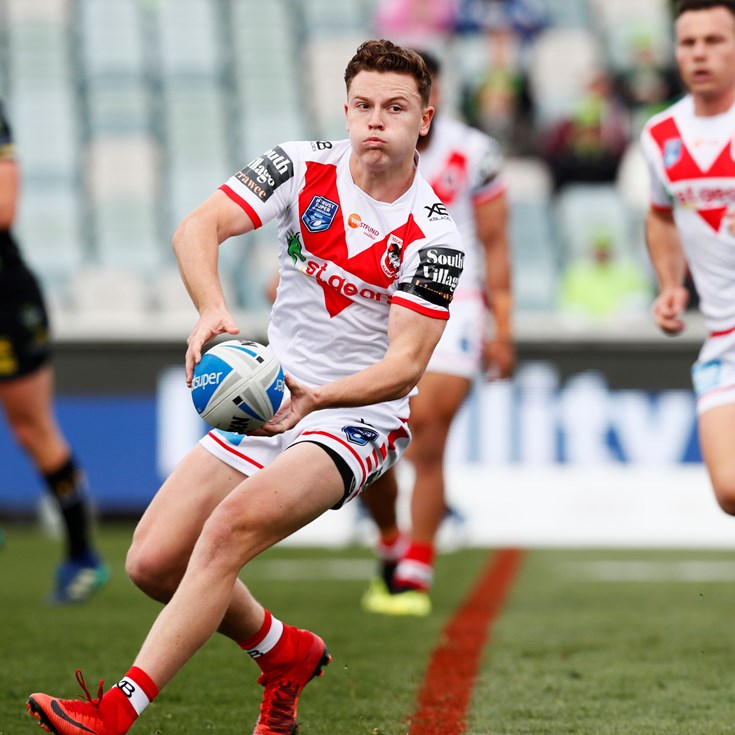