It's the clarity that only comes with age and rediscovering a once lost love.

For a long time Josh Dugan's raw talent was more than enough but having become tired of the complete dedication needed to succeed in the NRL, eight weeks pondering the alternatives gave him the insight to understand what was about to go to waste.

History will show that Dugan was sacked by the Raiders in March 2013 for a rooftop drinking session with teammate Blake Ferguson when they should have been at a recovery session but his behavioural attitude had been an issue at the club for some time.

He was shown the door and appeared headed for Brisbane before he goosed himself out of a lucrative contract with a social media meltdown, giving the rugby league world cause to wonder whether he was worth the effort.

Somewhat poetically his favourite childhood team, the Dragons, offered a career lifeline and two years later a cautionary tale reaches a happy conclusion when he represents Australia against the Kiwis at Suncorp Stadium on Friday night.

"You wouldn't be talking to me if it went the other way," Dugan tells NRL.com. "For me personally it was about not losing what I had and not wanting to lose it ever again.

"I got that kick up the bum that sometimes you need to realise what you have and what you don't want to lose and for me losing that contract and being in limbo for a good eight weeks, not being able to play footy and having to watch it and not being a part of that environment is something that I never want to lose again.

"I was a bit rebellious when I was younger, bit of a ratbag, but what young boy isn't?

"It took me longer than maybe most people to grow up but I feel like I've finally grown up and I've become a better person and a better player for it."

Dugan's arrival at the Dragons in 2013 is an obvious but significant moment in his career that enabled him to not only return to the NRL but to also reignite his representative ambitions.

Like their Kangaroos debuts on Friday night, Dugan and St George Illawarra teammate Trent Merrin made their Origin debuts together for New South Wales in 2011 and Merrin is delighted to be able to share such a special occasion with him again.

"I think that was the turning point for Joshy. He hit a few walls before he came to the Dragons and it's a credit to himself the way he's turned things around and his family," Merrin said.

"He's real family orientated and he knew he had to pull a few things into getting back on track and he's most definitely done that.

"We've been making some teams for a long time and I had a chat to him when he came over to the Dragons too. We've been in the mix for a while, me and Joshy, and I'm proud of him. He's worked real hard and had a few knock-backs as well and overcome them with flying colours."

Although the Raiders had come within two games of a grand final berth the previous year, it took just one game in 2013 for Dugan's lack of interest to manifest itself in the incident that led to his dismissal four days after a 32-10 Round 1 loss to the Panthers.

Coming up on his 25th birthday on May 10, Dugan says that the stark realisation that he may be forced out of the NRL allowed him to appreciate the fortunate position he was actually in.

"I lost that passion a bit before the time I got sacked and I think that was something that might have triggered it," he said.

"When I did get sacked and I got that chance again, I became a lot more professional. I guess I was always relying on my raw talent rather than the little things and I realised that the little things are what get you through week in and week out.

"When I got that opportunity with St George that passion was back and that love for the game was back and it's definitely something that I cherish now. I regret what happened but I've learned a big lesson from it." 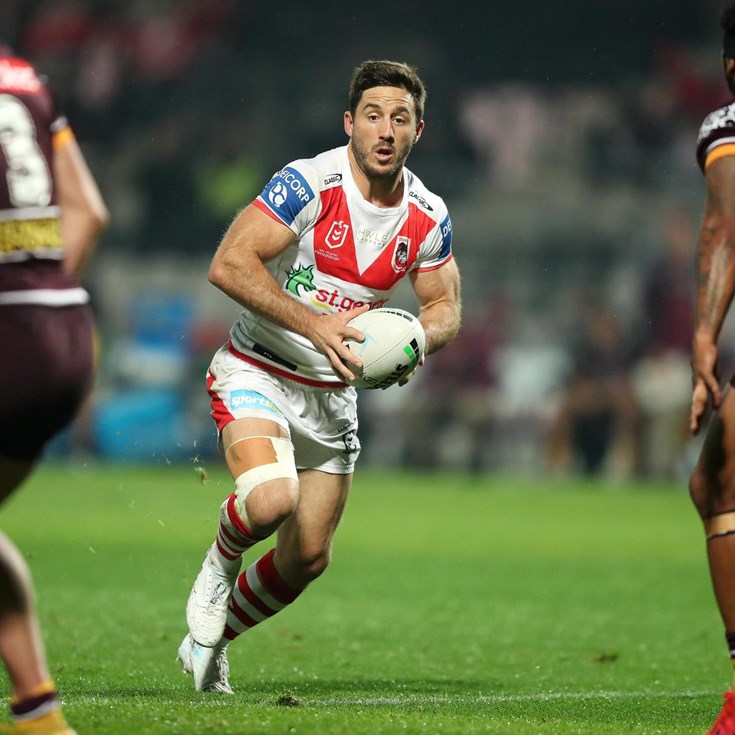